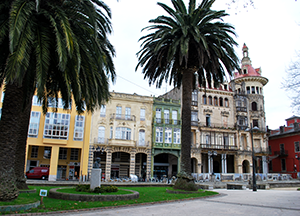 When you are walking the Camino del Norte (the Northern Way route of the Camino de Santiago) you will often encounter magnificent period houses with very unique and exotic styles. They are known locally as ‘Casas de Indianos’ and they were built by locals who emigrated to America or ‘made the Americas’ in the late 19th and early 20th centuries. Having returned to their home place, the ‘Indianos’ built their homes combining both colonial architectural styles they took back from the places where they had made their fortune (Cuba, Argentina, Uruguay and other South American countries) with native elements.

The ‘Casas de Indianos’ are very common in many parts of Cantabria, Asturias and Northern Galicia; as many people from those regions emigrated to South America in search of new opportunities in the late 19th century and early 20th century, when South America was a prosperous region and Europe was in economic turmoil.

The give-away to spot a good ‘Casa de Indiano’? Look out for big mansions and palace-style homes with elegant ornate facades, generally in quite unusual and bright colours. Ornamental gardens or a few palm trees are generally also planted nearby.

But local emigrants not only built luxurious homes for themselves upon their return to show off their new found wealth; in many cases, the ‘Indianos’ also sent money back to the local community to fund important projects such as building new schools.

You will find spectacular Casas de Indianos in towns along the Camino del Norte such as Llanes, Luarca, Ribadeo and more. The town of Ribadeo also hosts a Ribadeo Indiano festival, celebrating the legacy of its local ‘Indianos’ each year in the month of July.

If you are walking the Camino del Norte this Summer, let us know how many Casas de Indianos you spot, we’d love to hear about it and see your best pictures.

For more information about the Camino del Norte and to book your Camino trip, contact our travel specialists