Andalucia or Andalusia in English, is a province of South of Spain, on the Via de la Plata. Catholicism and local folklore. Traditional dress in all areas of Andalusia tends to be colourful and involve various head coverings reminiscent of a Muslim past. Cities like Almeria are influenced by both Granada and Murcia, with the use of traditional head coverings. The sombrero de labrador, meaning worker’s hats made of black velvet are a signature style of this area. The region also has a rich musical tradition that is mostly derived from Arab songs called cartageneras. Seville the largest province in Andalusia holds the Semana Santa the largest festival in Spain. During the festival religious fraternities dress as penitents (pilgrim worshipers) carrying huge altars. Songs and dances known as sevilanas, which demonstrate Middle-Easter origins are performed at such festivals. Overall, all the regions of Andalusia have developed distinct customs, but all share a connectedness to Catholicism and the region’s Arabic cultural past. 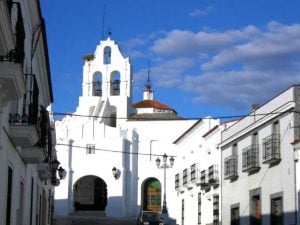 The Andalucia diet varies, especially between the coast and the interior, but in general is a Mediterranean diet based on olive oil, cereals, legumes, vegetables, fish, dried fruits and nuts, and meat; there is also a great tradition of drinking wine. Fried fish—pescaíto frito—and seafood are common on the coast and also eaten well into the interior under coastal influence. Northern bluefin tuna (Thunnus thynnus) from the Almadraba areas of the Gulf of Cádiz, prawns from Sanlúcar de Barrameda (known as langostino de Sanlúcar), and Deepwater Rose Shrimp (Parapenaeus longirostris) from Huelva are all highly prized. Fishing for the Transparent Goby or Chanquete (Aphia minuta), a once-popular small fish from Málaga, is now banned because the techniques used to catch them trap too many immature fish of other species.The name Jamón de Huelva is protected as a Denominación de Origen.The mountainous regions of the Sierra Morena and Sierra Nevada produce cured hams, notably including jamón serrano and jamón ibérico. These come from two different types of pig, (jamón serrano from white pigs, the more expensive jamón ibérico from the Black Iberian pig. There are several Denominaciones de Origen, each with its own specifications including in just which microclimate region ham of a particular denomination must be cured. Plato alpujarreño is another mountain specialty, a dish combining ham, sausage, sometimes other pork, egg, potatoes, and olive oil.

Cereal-based dishes include migas de harina in eastern Andalusia (a bit closer to a porridge than what migas means elsewhere in Spain) and a sweeter, more aromatic porridge called poleá in western Andalusia. Vegetables form the basis of such dishes as alboronía (similar to ratatouille) and the chopped salad known as pipirrana or piriñaca. Hot and cold soups based in olive oil, garlic, bread, tomato and peppers include gazpacho, salmorejo, porra antequerana, ajo caliente, sopa campera, or—using almonds instead of tomato—ajoblanco.

Wine has a privileged place at the Andalusian table. Andalusian wines are known worldwide, especially fortified wines such as sherry (jerez), aged in soleras. These are enormously varied; for example, dry sherry may be the very distinct fino, manzanilla, amontillado, oloroso, or Palo Cortado and each of these varieties can each be sweetened with Pedro Ximénez or Moscatel to produce a different variety of sweet sherry. Besides sherry, Andalucía has five other Denominaciones de Origen for wine: D.O. Condado de Huelva, D.O. Manzanilla-Sanlúcar de Barrameda, D.O. Málaga, D.O. Montilla-Moriles, and D.O. Sierras de Málaga. Most Andalucia wine comes from one of these regions, but there are other historic wines without a Protected Geographical Status, for example Tintilla de Rota, Pajarete, Moscatel de Chipiona and Mosto de Umbrete.