Spain is an incredibly diverse country with one of the most rich and varied cultures in the world. With every kilometre travelled in Spain, there is a new treasure to be discovered. Every corner of the country claims to be the best at something or other. Whether it’s the best at  a particular type of dance, producing a certain type of cheese or even the best at playing the anís bottle with the spoon … I’m not even joking.

Spanish is not the country’s only language

Just when you thought those Spanish evening classes might come in handy, depending on the Camino route you take, you might not encounter much Spanish at all! What we know worldwide as Spanish, is really only the dominant dialect known as Castillano or Castilian. However, Spain actually has a number of official languages including Basque, Catalan and Galician. Further to this, dialects and sub-dialects exist the country over. You can get a useful language cheat sheet from our Camino language travel tips section 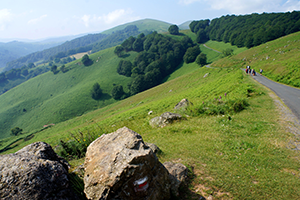 It’s not all Costa del Sol.

They love to give away free food 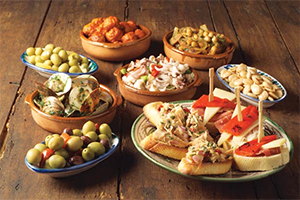 Here in our Dublin office, Tapas culture has taken the city by storm. We’re all familiar with the concept of tapas; small portions of food designed for sharing. But did you know that tapas were traditionally free and in a number of places in Spain still are? In cities such as León on the Camino Francés and Santiago de Compostela all you have to do is buy a beer or glass of wine and a small portion of food will come for free.
The more beers you buy, the more food you get. One way ticket to León please …

Even in regions where complementary tapas are not the norm, the Spanish will be sure to sort you out with some nuts, crisps or olives to accompany your drink.

This is how they celebrate Easter 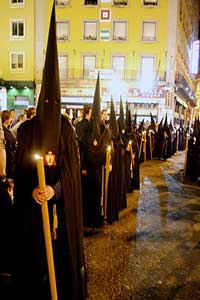 Not quite as cute as the Easter Bunny. Easter processions in Spain are quite the spectacle. These processions take place in the week leading up to Easter Sunday. During the processions, members of religious brotherhoods walk the streets dressed in penitential robes characterised by a  a large conical mask which covers all but the eyes of the wearer.The hood is designed to protect the identity of the wearer as they repent their sins. They may be seen carrying processional candles ,wooden crosses, or even walking the streets barefoot, and, in some places may carry shackles and chains on their feet as penance.

These Easter processions take place all over Spain with some of the most elaborate and abundant celebrations taking place in Andalucia, particularly in Sevilla, where the Via de la Plata Camino begins;
but also in Ferrol, on the English Way. Santiago de Compostela, Lugo and other major Camino cities also host impressive Easter celebrations. 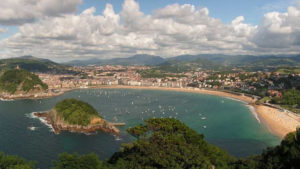 It doesn’t rain … but it pours.

In the gastronomic capital of San Sebastian in Northern Spain annual rainfall reaches 68.4.That’s much higher than Dublin which has just 28 inches per year … (so head over to Irelandways.com and come visit us!) But when a city looks as beautiful as this we can forgive the rain and let’s not forget that San Sebastian on the Northern Way has the second highest number of Michelen star restaurants in the world so there’s plenty to keep you and your stomachs occupied!

The good news is that rainfall in the North of Spain is mainly concentrated in the winter months. Check out our Camino weather map to see average temperatures and rainfall per month for cities along the Camino routes.

For more information about the Camino de Santiago routes or to book your Camino holiday, talk to our travel specialists