Gary and Diane Spurgeon of Normal met a cast of characters when they walked the 600 miles of the St. James Pilgrimage Way in Spain over three years.

In that regard, their experience was similar to actor Martin Sheen’s in The Way, a movie about the pilgrimage that was recently released to select American theaters. Sheen plays a wealthy doctor who decides to complete the pilgrimage after his son dies during a storm in the Pyrenees while making the spiritual journey.

But the Spurgeons said the movie glossed over the aches and pains felt when they made daily treks averaging 15 miles while they carried 20-pound backpacks. At times, it was less about a spiritual journey and more about dealing with the rigors of a challenging hike.

“Every night, you’d see people pop blisters, putting on foot cream,” said Gary Spurgeon, 64, who substitutes as a Spanish teacher after retirement from Country Financial. “‘No taking care of your feet here’ was a sign in a restaurant. … you’d see it all.”

They stayed in hostels that catered to pilgrims. Some offered smaller rooms with four bunk beds. Others were large dormitories where people spread out in their sleeping bags. For about $15 each, they got a place to stay and food.

“A lot of places wouldn’t let you bring hiking boots into the dorm for obvious reasons,” Gary Spurgeon said. “We had sandals to wear at night to let our feet air out.”

“We had two changes of clothes, just the basics,” added Diane Spurgeon, 57, a cook at Illinois State University’s Watterson Towers.

They ate energy bars to start their day at 5:30 a.m. They stopped for mid-morning coffee and a snack along the way. Lunch was often fresh-baked bread and fruit from the region. Dinner was equally simple. They ate plates of spaghetti. Potatoes were offered just one way: french fries. When near the sea, they ate seafood, including octopus. Their choice of beverage was often wine when the route took them by vineyards.

Nights were often spent attending Mass held for pilgrims in churches in the towns and villages along the way. Languages from all over the world were spoken during the readings.

The Spurgeons met in Spain in the 1970s while they both served in the U.S. Navy. Since then, they’ve loved to travel “on the cheap.” They’ve visited 24 countries in North America, Europe, Asia and Africa. They’ve seen 49 of the 50 states. Only Alaska remains.

After completing the final leg of the pilgrimage in 2009, they decided to return again and walk the entire route. In 2010, they covered the first 175 miles in 12 days. This year, they picked up where they left off and completed about 325 miles, reaching Santiago in 24 days on June 10. 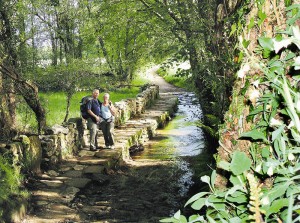 The cathedral is said to be the burial site of St. James, who along with his brother, John, were among the first disciples Jesus recruited. After Christ’s crucifixion, the disciples dispersed to preach throughout the world. James was assigned the Iberian Peninsula, including Spain. But some scholars doubt if he ever reached there before he become one of the first martyrs of the Christian faith.

Christian legend says his body was taken to Spain and buried. Whether true or not is unknown. But as the story goes, the exact location of his burial was lost for 800 years until the Middle Ages, when a shepherd claimed the Virgin Mary led him to the spot in a vision. Since then, religious travelers have walked the St. James Pilgrimage Way, which extends from the Pyrenees and to the cathedral built atop the burial site.

Marked by simple yellow arrows, the route follows trails and ancient Roman roads, gravel roads and highways. About 100,000 people walk at least a portion of the route each year. They obtain a pilgrim’s “passport,” which they have stamped along the way as proof of their visit. Most send their belongings ahead by taxi each morning. The Spurgeons opted to carry theirs for a more traditional experience.

Some days they wouldn’t see anyone. Others they walked with groups of 20 or 30, including college students absorbing Spanish culture. Toward the end, the route became crowded with people from all over the world, drawn to share a path to greater understanding of themselves and their spirituality. Many were going through life changes, such as divorce or job loss. Instant friendships were formed.

“You were walking along and sharing your whole life story with a stranger,” Gary Spurgeon said.

Two young women, one from South Africa and the other from Scotland, became like “daughters.” They talked about their lives. They were focused on what to do next. One had a job selling pharmaceutical drugs, but she didn’t like some of the drugs the company marketed. The other was a recent convert to Christianity who wanted to know how to live religiously.

On an earlier trip, they met two local people on horseback. Gary Spurgeon, a photojournalist in his younger days, snapped some pictures and took down their emails so he could send copies. One of them, a man named Jose, stayed in touch. When the Spurgeons returned to Spain, Jose drove to meet them and took them on a day-long tour of the area, including the Spanish equivalent of America’s Grand Canyon. When he learned Gary Spurgeon was having sinus problems, Jose went to a pharmacy and got him medicine.

Her favorite story was about a man named Pedro, who ran one of the hostels for pilgrims in an economically troubled town. Pedro showed them to a nice room and made a refreshing supper for them of lentils with homemade bread and jam. Three German pilgrims also stayed with Pedro.

Conversations around the table took place in English, German and Spanish. Asked if a Mass was held in the evening, Pedro answered a prayer service was held, but no official Mass. When the Spurgeons decided to go, they saw Pedro conducting the service and giving communion.

Apparently, the town had no priest, and Pedro served as a church. On the way home, they saw Pedro again, lifting a manhole cover on the street to check out some problem.

“We didn’t know if he was mayor or what,” Diane Spurgeon said. In the morning, Pedro served them breakfast. Meeting people like the young women and Jose and Pedro made trudging the “Camino de Santiago” worth a few blisters, the Spurgeons said.

“We developed our deeper faith with our religion and with God,” Gary Spurgeon said.