‘I’ll Push You is the story of two friends with an unbreakable bond. In 2014 Justin Skeesuck and Patrick Gray set out on an adventure like no other. Camino Ways agreed to support the pair after learning of their unique circumstance. Following a terrible car accident when he was 16, Justin was left fighting an autoimmune disease. Today, since losing the use of his arms, legs and hands, Justin is confined to a wheelchair. He’s determined to stay positive and now dedicates his life to supporting others and inspiring people with disabilities to keep living their lives fully. 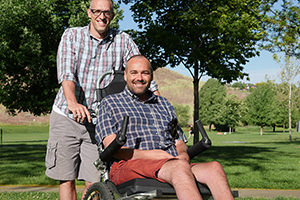 When he came up with the idea to make the 800km full trail of the Camino Francés, his lifelong friend Patrick agreed to push him. What followed was a truly inspirational and emotional journey as Patrick pushed and pulled Justin over steep hills, muddy farmland, and winding rural paths. A tale of brotherhood, friendship and perseverance that captures the magic of the ancient Camino trail was expertly shot by director Terry Parish.

Since completing ‘ I’ll Push You ‘, Justin and Patrick have been in high demand in recent months. They have appeared on many major US TV networks this year, including The Fox Network and NBC. The pair even gave their own Ted Talk, furthering their goal to communicate a message of positivity to those needing it most. ‘I’ll Push You’ will be premiered at the Newport Beach Film festival in California this week and has already sold out three of four screenings. 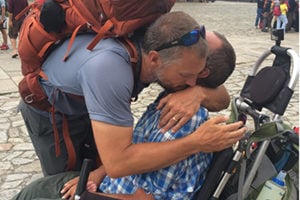 This is a testament to the hard work that has gone into the project and CaminoWays.com have been delighted to be involved throughout the process.

The annual Camino ways Fund has been set up by Dublin-based Greenlife Tours Ltd. (best known as CaminoWays.com and IrelandWays.com) to support inspirational projects that promote responsible travel practices, tackle environmental issues or address specific issues faced by communities and travellers on all Greenlife Tours trails: the Camino de Santiago.


For more details on ‘I’ll Push You’ please visit the official website: https://www.illpushyou.com/.

For more information on the Camino Ways Fund or details on any of our walking or cycling trips, contact our travel specialists.