For more info about the Camino, See our website 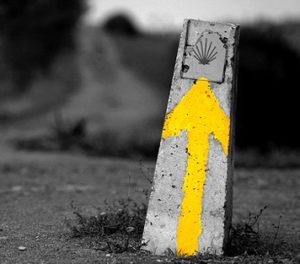 It’s one of the oldest Christian pilgrimages and after all these years the sense of camaraderie between those who attempt it is as strong as ever. Here’s why you should get involved…

This wasn’t at all what I was expecting.

Freezing chunks of ice manage to sneak into the gap where my hood and coat don’t quite meet; a one-inch opening exposing my half-closed, snow-encrusted eyes to the elements. Squinting through the deluge, I can just about decipher the hunched shapes of two of my fellow pilgrims ahead, a not inconsiderable layer of snow having already settled on their overfilled backpacks. Pan the camera out and the world is a whirlpool of white.

Welcome to Spain. In April.

For the past thousand years people have been following in the footsteps of St James by walking the Camino de Santiago. Stretching from St Jean in the French Pyrenees across northern Spain to the apostle’s supposed final resting place at the Santiago de Compostela Cathedral, the entire route of the French Way runs for nearly 1000km, or a month and a half’s trek.

My Camino experience was a ten-day, 200km section from Léon to Sarria, and, like a true Brit off to Spain, I had been banking on it being 30 degrees and sweltering. Hence the flip-flops and sunglasses wedged into my gargantuan rucksack; during the Camino, you do tend to feel like an overgrown snail. But such is the pilgrim’s lot. Even on the flight over from Gatwick to Santander, my three friends and I were surrounded by an escargatoire of fellow gastropods.

Upon arrival, we stay the night in the sprawling Cantabrian capital drinking in the carnival atmosphere of Spain’s holy week. On a Sunday night during La Semana Santa regiments of red-robed torch-bearers flood the city’s streets, marching to the beat of thudding drums. Over-excited children weave in and out of the processions, screeching, while their parents spill out of teeming tapas bars. The following morning we take the four-hour train ride down to Léon to begin our walk.

Over-excited children weave in and out of the processions, screeching, while their parents spill out of teeming tapas bars.

They say that the rain in Spain falls mainly on the plains. This may well be true, but they forgot to mention all the other stuff that comes cascading down upon the Castilian flatlands: hail, sleet, snow, sun and, most disconcertingly, a disproportionate amount of herons. But it was the raging Castilian blizzard that was of most pressing concern, and that was keeping my flip-flops ensconced within my shell.

After a couple of hours’ slog through the four-inch thick snow we reach one of the innumerable villages that dot the Camino.

It turns out that this cluster of five houses, four of which are deserted, has a population of one. And eight dogs, although they bear more of a resemblance to your average grizzly than to any canine I’ve ever seen.

This one man, whose mere whistle can bring any one of his slavering brutes to heel, tells us that such weather is perfectly normal for this time of year. It also turns out that he lives in his little central-heating-less stone hut all year round, and that this weather is nothing compared to the winter months. He shows us a photo of his home from a couple of years back completely submerged under eight feet of snowfall. It is indistinguishable from an igloo.

“Don’t you get cold?” we ask him, through chattering teeth.

“Of course not. I just move closer to the fire.” Naturally.

Now, if you’ve seen Emilio Estevez’s The Way, you will know that people undertake the pilgrimage for vastly differing reasons, be they religious, spiritual, health or just to get away from it all. Along the Way, I met a smorgasbord of characters, enough to populate a small novel. And like in Estevez’s film, each one had their own personal take on the Camino, what it means to them and why they are walking, cycling or limping it.

Some people, like Anita, an elderly Norwegian lady, are walking their fourth Camino. Others, like Chad, a Chicago-born ex-nightclub manager, have been so drawn in by the unique atmosphere of the Way that they have set up shop, or B&B in Chad’s case, en route. There is something about the experience that lures people back.

You hear these two words, ‘experience’ and ‘atmosphere’, a lot whilst walking the Way. And there is no doubt that the atmosphere of camaraderie you experience along the Camino is unique. As everyone is in the same situation, they help each other out along the route, be it popping blisters or sharing a bottle of Spanish red.

There is no doubt that the atmosphere of camaraderie you experience along the Camino is unique.

Rafael, a stone mason and artist, tells us of when a Danish girl came into his art gallery-come-café. Her Spanish wasn’t brilliant but the two of them spent a couple of hours having coffee while Rafael showed the girl his mosaic-like paintings, before she went on her way.

A couple of days later, a Danish film crew turned up and asked Rafael if he’d a seen a young Danish girl pass through. He said yes, and they asked what he thought of her, and whether he knew who she was. He said she was very pleasant, very beautiful, but no, he had no idea. The film crew laughed and told him that the girl was the Princess of Denmark. Rafael’s grey eyes crinkle at the edges, and he says “when you have a bag on your back, you are just like anybody else.”

The pilgrimage’s popularity is booming. Last year, over a quarter of a million people walked the Way. To put that into context, back in 2001 that figure stood at 60,000, and ten years before that, at fewer than 10,000.

But such an increase in pilgrims, whilst good for business, calls into question the integrity of the experience as an introspective journey and time for religious and spiritual reflection. If this is what you are after from the Camino, most of the people we met recommended avoiding the summer months, as they can get inundated by pilgrims and the days become a race for beds in sweaty, overflowing albergues (hostels specifically for pilgrims).

Not that a night’s sleep in the other months is without its perils.

After spending my first night in Léon, I wake up to sunlight creeping warmly across my face. Around me, eager pilgrims bounce from their beds in glorious anticipation of another day on the road.

Or that’s what I imagined. In reality, I roll over in my bunk, sinking ever further into my sleeping bag and try for the umpteenth time to ignore the cacophony of snores reverberating round the monastery which has served as our shelter for the night. Not to mention the suffocating smell of 40 sweaty feet, each one having pounded out 25 kilometres plus the day before. Pilgrims do shower, but apparently with a frequency in keeping with the Tudors.

Not to mention the suffocating smell of 40 sweaty feet, each one having pounded out 25 kilometres plus the day before.

If you really concentrate you can isolate each instrument within the snorechestra. There is the low thrum of the Spanish cyclist a couple of beds along from me, intertwined with the slightly higher-pitched snorts and whistles emanating from a Portuguese hiker on the other side of the room. And, coming from the old Frenchman in the bunk below, what can only be described as the braying of a wounded donkey. A couple of hours later, fresh-faced at breakfast, he has the temerity to ask how everybody slept. I’m sure he slept like a baby.

In sum, I thoroughly recommend investing in a pair of earplugs.

That said, the majority of albergues we stayed in were well-equipped and warm, and at around five to eight euro per night, good value. But some are definitely better than others when it comes to cleanliness, people per room, and quality, not to mention quantity, of food provided. If you stick to those run by ex-caminoers looking to give something back to the experience you shouldn’t go far wrong.

Crossing from the region of Castilla y Léon into Galicia, you notice a gradual change taking place. Not just in the landscape which becomes increasingly lush and verdant, the arid Nevada-like plains around Léon replaced by wine-rich rolling dales enclosing quaint grey-stone towns; think Somerset, but instead of cider, you have rioja. The language too, morphs from the strident chirruping of Spanish to the more Portuguese-sounding but equally loud and abrasive hiss of Galician.

Up in the hills, thankfully now bathed in peak-to-peak sunshine, we stumble upon a little café, cunningly positioned at the top of an Everest-like ascent, and run by a charming octogenarian named Maria.

For a small café in what is ostensibly the middle of nowhere, the interior is bustling. Walkers, cyclists, and locals (you can tell from the flat caps, cigars and wizened complexions) huddle round the bar, escaping the mid-afternoon sun.

Thirst sated by the umpteenth Fanta Limón of the day we contemplate our map, or rather lack of one. Thankfully, David, a Spanish cyclist, is able to be some assistance in plotting our route.

Thirst sated by the umpteenth Fanta Limón of the day we contemplate our map, or rather lack of one.

Having recently been operated on and fitted with a voice box after suffering a respiratory condition, he is on his way back from Santiago to Ponferrada having already cycled the other direction. He says that cycling the Camino has given him a new lease of life.

Maria tells us that over the 40 years of running her café, she has seen many people in similar situations to David, who undertake the Camino to prove something to themselves, or set off on one last adventure. But not everybody makes it.

She tells us of a man who came into her café a couple of years previously on dialysis. He was walking the Camino before travelling to Barcelona where his sister would donate him a kidney. He said he would come back to visit her, but he never returned.

The Camino is full of people with such stories and speaking with them you understand the attachment they have to the route and the importance that it holds for them. Walking the Camino is an experience to be savoured and I will definitely be doing it again.

Walking poles (they really do help!)