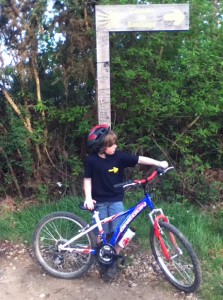 “Five Years Ti-i-ime,” my nine-year-old son is showing Noah and the Whale chords on an air ukulele to sixty something Liverpudlian Jack. Both play real ones back home.

“Santia-a-go!” They change the words to match the moment and Lucas’s demonstration appears to be winning Jack round. He is sceptical about our presence here.

We’re in the garden of an albergue (pilgrims’ hostel) in the hamlet of A Rua, on one of the world’s most famous pilgrimage routes, the Camino de Santiago de Compostela (the Way of St James). Jack, like most of the 250,000 annual pilgrims, is walking the route.

“Some things are not for children,” he says, when I explain we are on a new cycle touring package for families: our luggage is transported daily and sturdy all-terrain bikes make the 20km average mileage easy.

“It’s not about being easy,” Jack persists.

My latent Catholic sort of agrees. I was brought up thinking pilgrimages were all hair shirts and suffering. I’m long lapsed but still there’s a part of me that feels bowling carefree along the Camino is somehow cheating.

I had also expected that pedalling furiously after a kamikaze kid would not be conducive to quiet contemplation. I was wrong.

Yes, sometimes we’ve been bombing down bumpy mountain tracks with Lucas shouting “Buen Camino!” at walkers he’s almost taken out, but at others we’ve moved at a more leisurely pace, in companionable silence. Now we are seated round a large table in the Casa do Acivro hostel, communing with an assortment of adults, definitely not Lucas’s usual social circle.

And he is holding his own. He’s moved from car talk with ex-racer Tim from Swindon to describing the Canadian he mistook for Jesus (there are plenty of sandaled, bearded, tunic wearers along the route) and the nun who helped him pull his bicycle from a puddle so deep he should have thought twice before riding through it.

Lucas is enjoying the cycling but also the camaraderie and is quick to grasp the concept of pilgrimage. “It’s not just about getting there,” I say when he asks why people don’t just go straight to Santiago cathedral, where the bones of St James the Apostle are interred. “It’s about the journey and what happens along the way.”

If there had been a no-frills flight to the Emerald City, there would have have been no journey of discovery, no friendships forged and no encounters with good and evil.

The folk we meet are mainly driven not by religion but by various forms of spiritual and personal motivation. Not everyone knows why they are doing it, or what they will take home, but they are convinced it will be something.

Santiago can be reached on foot from France, Portugal or southern Spain but the most popular route is the Camino Francés, which begins in Saint-Jean-Pied-de-Port in the French Pyrenees and runs some 780km before reaching Santiago. Many pilgrims walk the entire way; others choose to complete shorter sections. Our cycle route runs 100km from Sarria, a small city in the Lugo province of north-western Spain. The Camino is marked with yellow arrows and the scallop shell of St James, making it virtually impossible to get lost.

But pilgrimages shouldn’t run too smoothly, and our first obstacle comes when we find that two adult cycles have been delivered to our hostel. This turns out to be a bonus as we end up walking the first part of the way, experiencing it as most pilgrims do. We chat to retired couples, Californian hippies and elderly Spanish women who offer olives and ruffle Lucas’s hair – an occupational hazard for a small blond boy in Mediterranean countries.

To my surprise, my son, who doesn’t eat vegetables, tries an olive and masks his discomfort long enough to put distance between himself and the giver before spitting it out. Later, with a cheery “might as well,” he samples the local speciality, pulpo a la Gallega (octopus with herbs and olive oil) and gives it the thumbs up.

Taking delivery of new bikes, we’re off next day, pedalling in the slipstream of the macho Lycra brigade.

“What happens if something goes wrong with your bike,” an elderly Irish man from Cork asks, as we stop for coffee and a slice of Santiago (almond) cake.

The bikes come with an impressive looking tool kit.

“Can you use it?” he raises his eyebrows and I nod towards the ciclistas, dowsing their faces with water from one of the many Camino-side fonts.

Lucas takes a breather on the camino

Actually, it’s my plan A but fortunately the bikes can take the strain of the often-rugged terrain. The route is beautiful but not easy going. We bounce along mountainous dirt tracks, dodge tree roots in eucalyptus forests and sink deep into mud in fields awash after several days’ torrential rain. We are soon saddle sore, but no real pilgrimage passes without some pain.

As we near Santiago, off-road tracks give way to quiet country lanes. After the village of Lavacolla, where traditionally pilgrims washed themselves in the river, we climb Monte do Gozo (Mount of Joy) and are rewarded with our first, moving, joyful sight of Santiago’s cathedral. The sight of the golden granite spires stretching above the Unesco heritage city gives a real sense of what it must have been like for early pilgrims, who had been walking for weeks with this in mind.

Up close, it’s just as impressive. Lucas is awed by the stonemasonry, the gilded interior and the vast botafumeiro, reputedly the largest incense burner in the world, but underwhelmed by the main attraction. We join a queue to shuffle down steps and peek through a grille at the silver tomb of St James.

“If I’d walked 500 miles to see this, I’d be disappointed,” says Lucas. (I think he was expecting actual bones or a saintly apparition – definitely something more than just a regular tomb. ) “It is like the Wizard of Oz: he wasn’t what they expected.”

Exiting via the gift shop into the early evening sunshine, we buy ice-creams in the Praza das Praterias. Here we meet Jack again, in flip-flops. His blistered feet and limping gait testify to the arduous nature of his journey.

“Was the cycling fun?” he asks.

“Yes,” Lucas replies. “But I’d like to walk it, when I’m a bit older. That would be more satisfying, somehow.”

“Composte-e-la,” Lucas strums back, their brief exchange a tacit acknowledgement of their individual achievements.

• Camino Ways (020-3468 1516, caminoways.com), which provided the trip, offers a variety of tours on the camino: a seven-night trip from León to Santiago costs from €650, including accommodation, luggage transfer and route notes. Bike hire is €151. Children aged three-nine get 40% discount, children 10-14, 20% discount. Ryanair (ryanair.com) provided the flights. It flies from Stansted to Santiago de Compostela from about £50 return.The Radisson Blu Hotel London Stansted Airport (radissonblu.co.uk/hotel-stanstedairport, doubles from £90) provided accommodation. Parking was provided by Stansted Airport (stanstedairport.com) – from £48 a week

written by Lizzie(Guest Post)
Freelance journalist from the UK. She writes for many publications including The Times, Guardian, Psychologies Magazine, Telegraph, Irish Independent, etc...
More by Lizzie
Contact Us