Couple finds ‘The Way’. As Thanksgiving approaches, Lee and Anita Lamond will no doubt be more grateful than usual for basics like hot water, soft beds and clean clothes. The two veteran travellers recently walked the 500-mile pilgrimage route known as El Camino de Santiago in Spain. And although the six-week experience was unforgettable, the Lamonds are happy to be off the road…at least for the moment. The North Wales couple began their journey along the legendary Way of St. James in the French town of Saint-Jean-Pied-de-Port in late August and reached their destination – Santiago de Compostela in northwestern Spain’s Galicia – Oct 4. The trip was unforgettable, but the creature comforts…well, they left something to be desired. 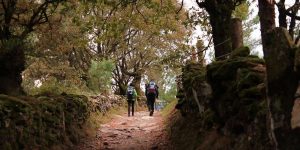 Not that the Lamonds are complaining. In fact, they look back on their Camino experience as the trip of a lifetime and recall the camaraderie and generous spirit of fellow walkers along the route as particularly memorable.
Area movie-goers may have caught Martin Sheen in “The Way” this fall. The film follows Sheen – portraying a fictional California ophthalmologist – as he covers El Camino de Santiago in memory of his recently-deceased son.

The character Sheen plays – like the Lamonds – began his trek in Saint-Jean-Pied-de-Port before manoeuvring the Pyrenees and ultimately arriving at the 11th-century Cathedral of Santiago de Compostela where St. James the Apostle’s remains are thought to be buried. The Lamonds describe their experience as a lot more gruelling than the big-screen version. On the other hand, Anita reasons, “Everybody does the Camino in their own way – for their own reasons – and who’s to say there’s a right way or wrong way?”

She and her husband began their pilgrimage in the fierce heat of late summer. And although their long hikes – 10-hour days were routine – occasionally took them along paved or shaded roads, such “luxuries” were the exception.

More common? Brutal temperatures in the low 100s and hilly, uneven terrain studded with rocks and pebbles. The Lamonds and fellow pilgrims jockeyed for space with local farmers herding cows to pasture and vied with one another for bunk space (bed bug-free on a good night), toilet time and food in the humble hostels (“albergue” or “refugio” in Spanish) that sheltered them most nights. They endured their share of blisters, bandaged, beat-up feet and mild orthopedic issues and watched others deal with far worse.

Their efforts made the Lamonds part of a centuries-old tradition. The Way of St. James is more than 1,000 years old, and during the Medieval era, its importance as a Christian pilgrimage route equaled that of Rome and Jerusalem. The route’s popularity gradually declined as disease, political upheaval and war made its completion more treacherous, but that popularity has picked up significantly during the past few decades. The Council of Europe declared the Camino the first European Cultural Route in 1987, and it is also a UNESCO World Heritage Site.
Contemporary travelers on the Way of St. James quickly become familiar with the iconic directional markers that point toward Santiago de Compostela and the ubiquitous scallop shell that symbolizes the pilgrimage. Most carry a “credencial” or pilgrim’s passport and have it stamped in each town visited along the way. The document allows access to certain free or cheap overnight accommodations and, completed, earns bearers a special certificate – the “compostela” – once they reach Santiago de Compostela. Travelers awarded the document are entitled to have their home countries and pilgrimage starting points announced during the next day’s noon Pilgrim’s Mass in the Cathedral of Santiago de Compostela.