Elizabeth Musser is a Christian author who lives half the year in France and has a very unique perspective on the Camino.

Here you can enjoy a Q&A with the author to discuss her latest novel, The Promised Land (released November 2020) which is partly based on her pilgrimage along the Camino in France:

1) The Promised Land is about pilgrimage and specifically walking the Camino. Where did your inspiration come from?

Ten years ago, the president of One Collective, the faith-based organization we’ve been serving with for over 35 years, asked my husband Paul and me to become “Pastors to Workers”, providing pastoral care to our colleagues who serve in Europe and beyond. Quite a change from our work in French churches. On one of the first pastoral care visits, we met a team of young people working hard to open a ministry center for pilgrims walking the Camino. Over the years we have visited these colleagues and watched with joy as The Pilgrim House became a reality: a place at the end of the Camino in Santiago, Spain where pilgrims can relax and process the journey they’ve been on with Christians who welcome them no matter their faith journey. Two years ago, with multiple ideas running around in my head for a novel about the Camino, I decided to walk a part of this pilgrimage myself. I started in Le Puy-en-Velay, and like dear Abbie, the protagonist in the novel, walked a few days alone. But of course, as every pilgrim learns, I was never alone on the Camino. Many of the scenes recorded in this novel were inspired by my time on the Camino as well as stories I heard from other pilgrims. 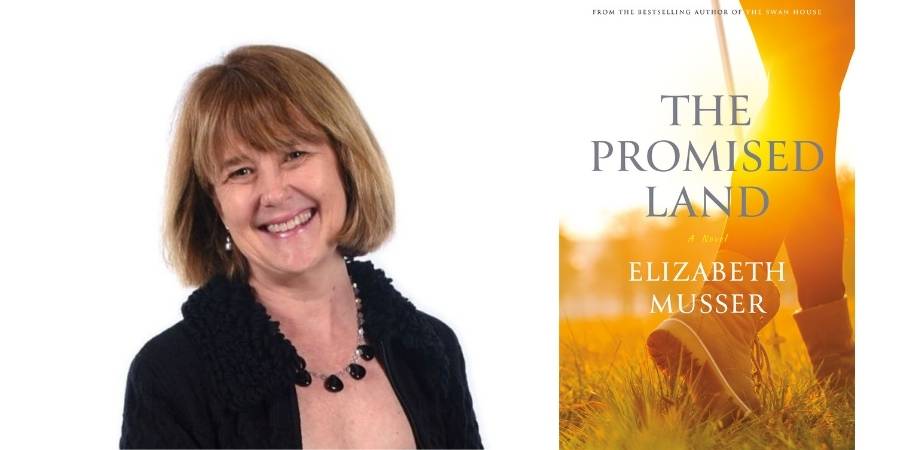 2) What are the main themes in The Promised Land?

The central question in the novel is simply: What gets through when everything is taken away? I find it both ironic and timely that, although the novel was written before Covid-19, the theme of loss and specifically loss of control is what most of us around the world are feeling at this point in our lives. I wanted to take four very different personalities and see how each responded to the idea of loss, of being out of control, and what happens when each chooses to leave the ‘known’ behind and walk forward into the ‘unknown.’ I’ve been working through a virtual Camino experience and very much appreciate the title of a poem by Antonio Machado: The Way is Made by Walking. I think this is what my characters learn. In the spiritual sense, as Christians, we are asked to trust that the Lord knows the way we should go. But we don’t. We just get a little bit of light each day—as the psalm says, “Thy Word is a lamp unto my feet and a light unto my path.” (Psalm 119: 105) “You are never alone on the Camino,” Abbie is told before she starts out. My pilgrims in The Promised Land discover that the journey is as important as the destination. How they get there and with whom is every bit as important as arriving. This is the message that many pilgrims come away with on the Camino as well as the sense that the end of the physical Camino is just the beginning of a new way of seeing and experiencing life. 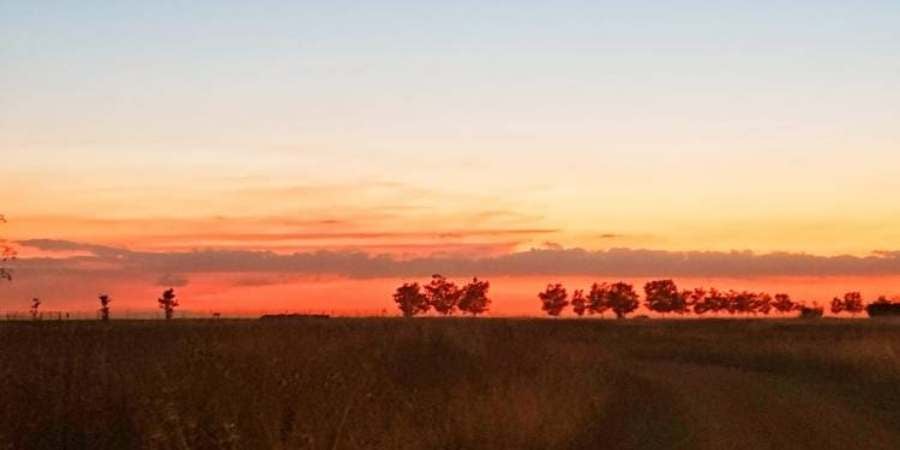 3) You also talk about a practice called Spiritual Direction in the novel. What is this?

About ten years ago, around the same time as Paul and I began our new ministry of pastoral care, I was introduced to Spiritual Direction, an ancient practice that has gained popularity in recent years. Although it can have many different ‘flavors’, I’ll let Diana, the spiritual director in The Promised Land, explain what I mean by this term: “Spiritual direction is about listening, me listening to you, you listening to the Holy Spirit, us inviting Jesus to be present in our time. It’s about being attentive in the present, taking time to hear what God is saying, what is going on inside.” I have found this practice and the spiritual disciplines incorporated within to be very lifegiving for my soul, ever spurring me along in my walk with Jesus and helping me accept in deeper ways His extravagant love for me.

4) How is The Promised Land related to your novel, The Swan House?

The Promised Land is the third book in The Swan House Series. Here’s a little blurb I’ve used to explain the relationship: “From the author of The Swan House, a classic in the South, comes the continuing story of the Middleton-Bartholomew family… First, there was The Swan House, then The Dwelling Place, and now, The Promised Land. Come walk the Camino with Abbie, Bobby, Caro, and Rasa, as their lives intersect on pilgrimage and with beloved characters from these past novels.” The Promised Land opens in 2018 with members of the Middleton-Bartholomew family getting a behind-the-scenes tour of the newly installed Cyclorama at The Atlanta History Center. It then moves to a high-end loft on Atlanta’s up-and-coming BeltLine before sending its protagonists, Mary Swan Middleton’s oldest daughter, Abbie, and oldest grandson, Bobby, on a journey across the ocean to walk the famed Camino pilgrimage. I’ve always known there would be four novels in The Swan House Series, although each novel stands on its own and can be read without the others. (They’ve also been written during the course of twenty years!) The Swan House (c2001) is Mary Swan’s story, The Dwelling Place (c2005) is her youngest daughter Ellie’s story, and now The Promised Land (c2020) is where oldest daughter Abbie gets the spotlight. Last, but not least, The Wren’s Nest, a novel featuring Mary Swan’s middle daughter, Nan, will find its wings sometime in the not-too-distant future. Bobby, first introduced in The Swan House and The Dwelling Place, has grown up and found his voice in this story. Caro is a brand new friend, but Stephen, Tracie and Rasa wandered into this story from a few years back in The Long Highway Home (c2017). Finally, Mary Swan (Swannee) Middleton, the much-loved protagonist of The Swan House, and her deliciously eccentric mentor, Miss Abigail, play an important role in The Promised Land, with Robbie Bartholomew (Granddad), Bill Jowett (Abbie’s husband), and Rachel Abrams making appearances in the story too. 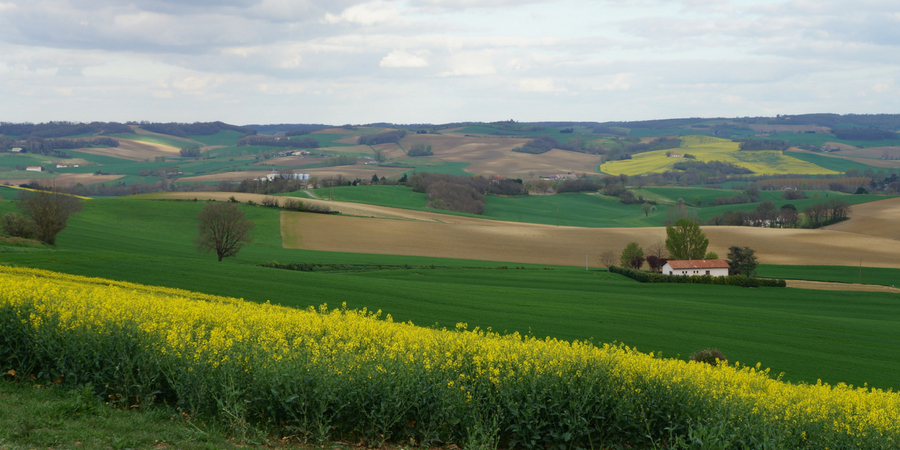 5) Often your novels include physical places that seem to take on a personality. Any of those places here?

Actually yes! I enjoy personifying places and the symbolism that often slips in serendipitously to my stories for my readers to discover. A few examples from The Promised Land: The Camino: I think there is such a new awareness and interest in the Camino because 21st-century humans are looking again to the idea of pilgrimage, a way to turn off all of our devices and find some quiet space in our heads. The Camino is a symbol of that quiet place. Provence: This part of France is pretty amazing too, especially in the summer with its sunflowers and lavender. Dear Caro, one of the main characters, has a wonderful sense of smell, so that plays into the scenery. And then there’s that rosebush, Augusta Luise… And those Huguenots: They seem to find their way into many of my stories, as does the Huguenot cross. One of the original ‘ah-has’ for this story came when a dear friend and fellow Francophile posted photos on Facebook from her visit to Fort Caroline. (Please excuse the unintended alliteration!) So I dragged hubby Paul to Ponte Vedra while I researched Fort Caroline. During my thirty plus years in France, I’ve heard many friends talk about the beautiful city of La Rochelle and its Huguenot history. So Paul and I traipsed across France to the Atlantic Ocean and vacationed at Ile de Ré while researching La Rochelle. Yes, being a writer certainly has its perks—especially where research is concerned! The cross-stitched tapestry: I haven’t cross-stitched anything in twenty years. But with Covid and confinement, and inspired by the story I was writing, I picked up my needle, thread, and canvas, and stitched two little projects for my brand-new granddaughter. It helped lift the sadness of not being able to see her in person. But my project was in no way like the masterpiece that dear Abbie is stitching. Of course, the way Abbie stitches tells us a lot about her personality and the tapestry becomes an important symbol in the novel with a twist on the often-used metaphor. 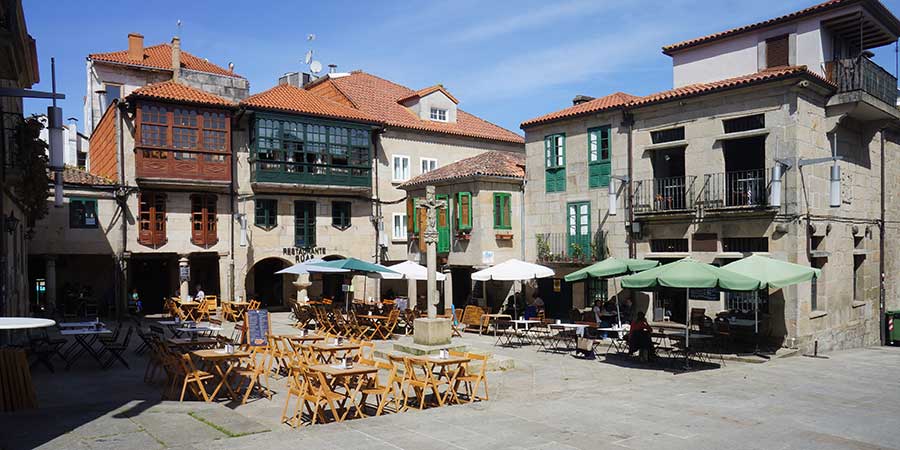 6) I hear you have some visual treats in store for your readers. Please do tell!

I’ve prepared short video clips (most under a minute) with me in many of the places I describe in the novel. So in a sense, I will be taking my readers on a virtual Camino with me. I’ll be revealing the videos and photos little by little, several to get readers ready for release day (sorry for that alliteration again!) in early November and then continuing throughout the next weeks. There will also be fun swag and other giveaways to win during launch season, including a pilgrim’s passport—essential for every Camino traveler. Another of my favorite prizes is a santon of dear Saint Jacques. Now if you don’t know what a santon is, that means you haven’t read The Secrets of the Cross Trilogy. But I’ll forgive you and simply say that this santon represents the Apostle James, the namesake for the Spanish town of Santiago (or Saint Jacques de Compostelle in French) which marks the end of the Camino.

Thanks for the chance to chat with you today about The Promised Land.

Happy Reading, or as they say over on the pilgrimage: Bon Camino!

If you have any questions about the Camino in France or any of the pilgrimages along the Camino de Santiago, get in touch with us by filling out the form below: