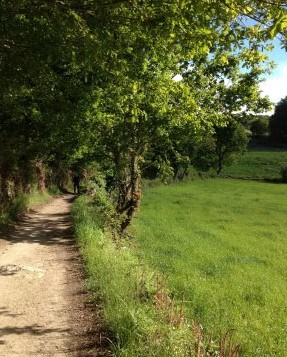 Who: Leda McIntyre-Hall of WashingtonWhere, when, why: I went to Spain for three weeks to walk part of the Camino de Santiago. Like many Americans, I hadn’t heard of the Camino de Santiago until the release of the Emilio Estevez and Martin Sheen film “The Way” in 2011. I saw the movie at a critical juncture in my life and resolved to walk part of the 500-mile route that begins in Saint-Jean-Pied-de-Port, France, and ends in Santiago de Compostela, Spain.Highlights and high points: The weather ranged from 40 degrees with rain to 80 degrees with brilliant sunshine. Most of the way, we were either in mountains or hills dotted with wildflowers, goats, cattle and tiny villages. There was a cacophony of birdsong; I have no memory of ever hearing so many birds at one time. There were farm smells and the mustiness of old churches. At the farmhouse inns where I slept, there were homemade dinners and breakfasts with almost everything grown and harvested on the farm. I’m fairly certain that our fresh eggs and just-from-the-oven-bread one morning were served with fresh milk. And at the end of most days, the pilgrims gathered to share stories over cold beers, fresh bread and cheese.

Cultural connection or disconnect: People say that things happen for a reason on the Camino. On my second day of walking, I greeted two women. We walked together for an hour, sharing life stories as if we were old friends. One of them shared what became the Irish wisdom of my trip: She said she’d learned that we all have gaps in our lives and hearts, but she found it helpful to allow the gaps and to be surprised by and thankful for whatever fills them. Even if it’s silence.

Biggest laugh or cry: I began the Camino in Hospital de Orbigo, slightly west of León. The path there is wide and dusty and surrounded by fields of crops and wildflowers. By the end of the day, walking 15 miles and hitching a cab for 15 more, I arrived in the tiny village of Foncebadón, not quite two miles from the Cruz de Fierro (the Iron Cross). Walking these two miles was one of the most significant times on the Camino for me. The cross sits atop a staggering mound of stones, laid there by thousands of pilgrims symbolically relinquishing their sins and burdens or pleading for mercy or a blessing. It was cold and raining, and a blustery wind buffeted the pilgrims as we approached this highest point on the Camino. Everyone stopped at the foot of the mound and waited in silence as each person, alone, climbed to the top and laid down a stone. I am not a person of faith or religion, but the symbolism of unburdening was truly powerful.

How unexpected: I thought that it might be difficult to be simply on the Camino without thinking too much. But the peace and natural beauty were music to my soul, and I was surprised by the colors of the flowers, the flutter of a butterfly, the smell of freshly mown hay.

Fondest memento or memory: Among the traditions on the Way is the greeting “Buen Camino!” It’s a ubiquitous phrase, diligently exchanged by those walking, the people we passed in villages, and folks in shops and cafes. Buen Camino: Have a good Camino, find what you need along the way, leave your burdens scattered along the path, be in the moment.

To tell us about your own trip, go to www. washingtonpost.com/travel and fill out the What a Trip form with your best memories, finest moments and favorite photos.

*This article was originally published by The Washington Post on:
www.washingtonpost.com