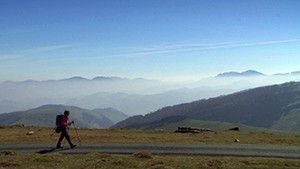 We have a few copies of Walking the Camino: Six Ways to Santiago, the Camino documentary to give away. This week, we catch up with director Lydia and Maggie, from the documentary team to see what has happened since we last spoke to them:

In 2009, Lydia returned to the Camino Francés with a crew of 12 people to shoot over 300 hours of footage for what would become Walking the Camino: Six Ways to Santiago. Lydia had been working in the film industry for more than a quarter decade, so was able to cash in some favors and gather a very professional team for next to no money. 80% of all the money needed to make the film came from individual donors over the course of five years.

In February 2014, Lydia set off on a 60-city theatrical cross-country US+Canada tour in a 27 foot-long RV she financed herself. “It screened in an additional 70 cities in theaters off the tour route and propelled its way to grossing over $605,000 dollars, making it onto #196 of Box Office Mojo’s list of top-grossing documentaries of all time! It was a very exciting time,” explains Maggie. 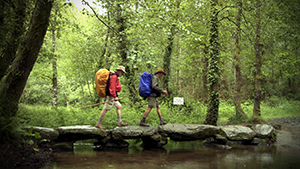 What’s makes the movie special?
Maggie joined the team after the film had made its film festival debut. “The first time I saw the film, I went with my mom and at the end of those 84 minutes, I turned to my mom and with tears in my eyes, I said “Mom, that was my Camino.”,” she says.

“I feel that this documentary is so special because it captures the essence of the Camino as much as anything can without actually having two feet on Spanish soil. I have read hundreds of comments from pilgrims who have walked the Camino and say the exact same thing I did – it took them back to their Camino. This movie has the power to transport people there and give people a slice of the Camino experience – that is Camino magic, which Lydia captured beautifully in the film.”

Exciting times ahead
“We have an app in the works! One of the developers from a local Portland, Oregon (our HQ) mobile technology company generously donated the creation of our original app back in the fall of 2013 prior to the film’s cross-country US/Canada theatrical tour which enabled people to follow us while we were on tour. Now, we’ve launched a Kickstarter campaign to raise money to develop an app that will give pilgrims the opportunity to capture, share and tell their Camino stories and connect with other pilgrims. We also have a 53 minute cut down version of the documentary that we are hoping to get into hour-long television slots and classrooms.”

The Camino documentary can be purchased online at www.caminodocumentary.org (DVD, DVD Bonus Pack, BluRay, Video on Demand) and pilgrims get a special discount (CODE: pilgrim10); you can also purchase a copy on itunes and Amazon (US only).

For more information about the Camino de Santiago or to book your Camino walk, contact our travel specialists