The Via Francigena in Switzerland covers a distance of 157 kilometres and is one of the most spectacular sections on the entire Via, the Camino to Rome. It combines high mountain trails, flat lakeside paths, medieval towns, world-famous vineyards and an abundance of amazing art, architecture, history, culture and of course not to mention the spectacular scenery.

The walk starts in Lausanne and before you start your walk it’s well worth taking some time to see the sights and take in the atmosphere. It is a student town but is also part of the ‘Swiss Riviera’ so is well-appointed with something for everybody. The city is known as the ‘San Francisco of Switzerland’ due to the nature of the steep lakeside streets. While here you might like to visit Beaulieu Castle, Notre-Dame Cathedral or the Olympic Museum. 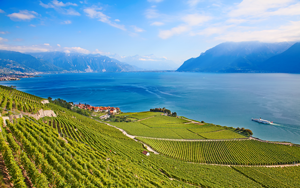 As you leave Lausanne on your walk you will pass alongside the Lavaux Vineyard Terraces. The stunning vistas of the vineyards which seemingly flow down into the lake are only equalled by their historical and cultural importance. The vineyards have been classed as a UNESCO World Heritage site since 2009 when they were officially recognised for their outstanding universal value. The area is recognised for its importance in the history and continuation of cultural traditions in the area, as well as the long term interaction between local people and their environment. 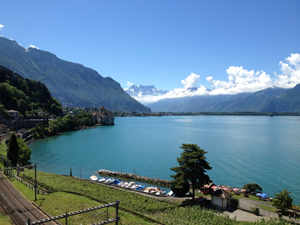 The Château de Chillon is an island castle which sits on the edge of Lake Geneva between Montreaux and Villeneuve. Beginning life as a Roman outpost, the oldest parts of the current castle are believed to date from the start of the 11th century. After this, the castle was used as a summer home by the Counts of Savoy. Nowadays the castle is open to the public and houses 14th-century murals as well as recreations of what the rooms would have looked like while it was in use. However, the real draw of this castle is the fairy-tale architecture combined with a stunning location set between the steep hillside and the shore of the lake. It’s no wonder that it is one of the most visited sites in Switzerland.

The Great St. Bernard Pass marks the point where the Via Francigena crosses the Alps from Switzerland into Italy. The pass has held significance for thousands of years as a crossing point and has seen the armies of Augustus and Napoleon march through. Nowadays the pass is perhaps best known as the home of the St. Bernard dog. 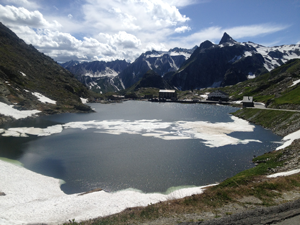 They were bred at the Great St. Bernard Hospice as mountain rescue dogs. They are legendary for having small casks of brandy around their necks in order to revive weary travellers, although it seems that this is more than likely just a myth. The views from the Great St. Bernard Pass are stunning and signal a small victory as you summit the highest point between Canterbury and Rome on the Via Francigena.

Aosta sits in a beautiful valley along the Dora Baltea River which is fed by meltwaters and the glaciers of the high Alps. In early Roman times, the town was of huge strategic importance as it stood on the edge of their empire. It continued to be an important place due to its geographic location even after the Romans moved into the rest of Western Europe. As a result, it is home to some fantastic Roman ruins including the very well-preserved town walls, a variety of towers, a theatre and the Arch of Augustus. Over the centuries the town was also home to Burgundians, Ostrogoths, Byzantines and Franks who all left their mark on the town in one form or another. In the centre of the town, the Piazza Emile Chanoux is a great place to unwind after your walk and take in the view of the mountains which are framed beautifully by the narrow streets.

For more information about the Camino to Rome or to book your walking holiday on the Via Francigena in Switzerland, contact our travel specialists.