The Via Francigena is one of the longest pilgrimage routes in Europe. From Canterbury to Rome, the trail takes walkers to some of Europe’s most spectacular regions, as well as areas of fascinating history and culture. These are some of the Via Francigena highlights: 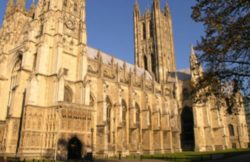 CANTERBURY CATHEDRAL
Canterbury Cathedral is the departing point of your Via Francigena journey. Founded in 597 and re-built in the 11th and 12th centuries, the cathedral is the home of the Archbishop of Canterbury. It is from here that Sigeric the Serious, Archbishop of Canterbury in the 10th century departed on his pilgrimage to Rome. His detailed account of the journey is the first Via Francigena travel book and our itinerary today still follows mostly Sigeric’s route.

Canterbury Cathedral is on the first section of the trail: Via Francigena from Canterbury to Wisques. 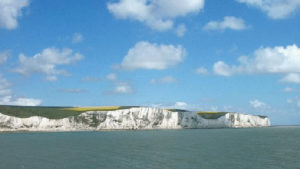 Dover’s iconic White Cliffs, in Kent, United Kingdom, owe its characteristic bright white colour to its composition: they are an impressive cliff face of soft white chalk as high as 350 metres; highlighted by streaks of black flint. The cliffs are located on the narrowest part of the channel that separates Britain from continental Europe. For this reason Dover’s White Cliffs have had an important strategic and defensive role over the centuries. Interesting history, stunning views across the channel and rich wildlife attract visitors to the White Cliffs today.

The White Cliffs of Dover are located on the first section of the trail: Via Francigena from Canterbury to Wisques.

BATTLEFIELDS OF THE SOMME
The Via Francigena trail also crosses the Somme region in Northern France where some of the most important battles of World War I took place.

The third section of the Via Francigena from Arras to Laon is dotted with military cemeteries and memorials, a poignant reminder of the lives lost during the Great War. The Chemin des Dames (Ladies’ Path), as well as Peronne’s Great War museum and Monument to the Fallen are both on your way. 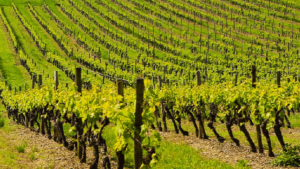 CHAMPAGNE AND REIMS CATHEDRAL
Section 4 of the Via Francigena from Laon to Reims, in Northern France, takes walkers across the vineyards of the Champagne region where the world’s most famous bubbly is produced; as well as Reims Cathedral, a Gothic masterpiece. The Cathedral de Notre Dame in Reims was, for many centuries, the place chosen by French Monarchs to be crowned.

BESANCON’S CITADEL
Besancon is the last French city on the Via Francigena pilgrim trail before crossing the Swiss border. Its UNESCO-listed Vauban Citadel is a military masterpiece; offering magnificent views of this city hugged by the Doubs River and its surrounding landscape. 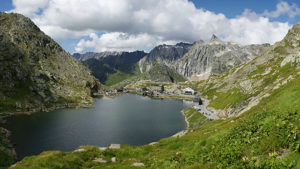 LAKE GENEVA AND THE ALPS
Once in Switzerland, the Via Francigena takes pilgrims from Lausanne on the shores of Lake Geneva, Switzerland; across the Alps and into the Aosta Valley, in Italy. Stunning scenery as you hike along Lake Geneva with the Swiss mountains as a backdrop; and into the Alps crossing the traditional St Bernard’s Pass make this section of the Via Francigena one of the pilgrims’ favourites. Note this section can only be walked in the Summer months.

Lake Geneva and the Alps are located on section 9 of the Via Francigena from Lausanne. 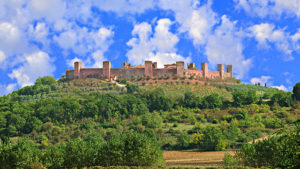 Inspiration for Renaissance artists, home to picturesque rolling hills of verdant vineyards, ancient hilltop towns and delicious local cuisine… the Via Francigena in Tuscany is the most popular amongst pilgrims and walkers for a good reason!

Section 14 of the Via Francigena from Lucca takes in lush countryside as well as spectacular towns and villages such as UNESCO-listed San Gimignano ‘of the beautiful towers’ and the iconic fortress-village of Monteriggioni.

Section 15 of the Via Francigena from Siena crosses the glorious UNESCO-listed Val d’Orcia, and its famous vineyards.

SIENA
A magnificent city and UNESCO World Heritage Site for its unparalleled heritage, Siena is the most unmissable city on the Via Francigena, after Rome. World-famous for its art, history and architecture, Siena truly is a living open-air museum. The city’s iconic unique Piazza del Campo hosts the spectacular ‘Palio’ horse race each Summer. 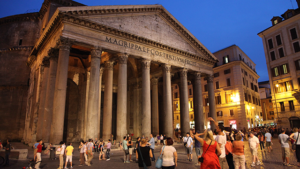 Rome, the Eternal City and home of the Holy See, is the final destination of the Via Francigena. Capital of European culture, cradle of the Roman Empire and home of Christianity, Rome is many cities in one and an absolute must-visit at least once in a lifetime. After getting your Testimonium (pilgrimage certificate) in the Vatican, pilgrims should take at least a couple of days to explore Bella Roma: be amazed by its ancient monuments, unveiling layers of history; enjoy the lively atmosphere of Trastevere and treat yourself to a celebration dinner in a traditional Trattoria… you deserve it after your long journey.

You don’t have to walk the whole 2000kms of the Via Francigena to walk into Rome; most pilgrims choose to start the Via Francigena from Viterbo, and complete the last section of the trail. As you approach Rome, you will get great panoramic views of the city from Monte Mario.

For more information about the Via Francigena highlights or to book your trip, contact our travel specialists

written by Claire
Customer Experience Director Claire hails from the lovely Midlands and spent some years living in Galway in the West of Ireland, where she completed a degree in languages. She also lived several years in France and she has a masters degree in French Language and Literature. She has travelled many routes both on foot and by bike, including the Via Francigena in Tuscany, the Camino del Norte in the Basque Country and Cantabria, the Portuguese Coastal Way and the Camino Ingles.
More by Claire
Contact Us