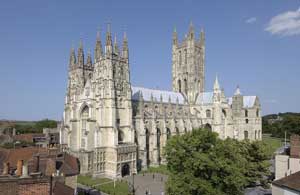 The route of the Via Francigena to Dover follows that of the North Downs Way and takes you along quiet country roads, gravel paths, farm tracks and old Roman roads. Along the way you will pass through picture perfect villages and hamlets and pass farmsteads, cottages and stately homes.

The Via Francigena in England begins in the town of Canterbury which is one of the most historically significant in Great Britain. The thousand year old Canterbury Cathedral is an outstanding UNESCO World Heritage site and is the cathedral of the Archbishop of Canterbury who is the leader of the Church of England.

The walk out of the town will lead you through the magnificent city walls by way of the 14th century Westgate. Canterbury is not a very big town so it won’t be long before you find yourself walking through farmland.

Shortly after the village of Patrixbourne you will pass the entrance to Higham Park. Higham Park is a large neoclassical mansion which was once home to motor racing driver Count Louis Zborowski. He is perhaps most notable for building and racing cars which were known as Chitty Bang Bangs. The cars went on to inspire the book, film and stage musical Chitty Chitty Bang Bang. The books author, Ian Fleming, was just one of the famous visitors to the house throughout its history, along with Wolfgang Amadeus Mozart, Jane Austen and Charles de Gaulle. 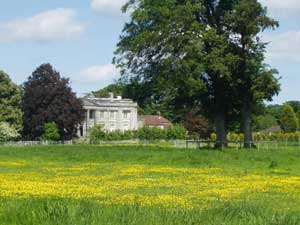 Your countryside stroll will then bring you to Woolage Village. This is a tiny hamlet which sits like an island of houses amongst the fields. It was constructed in 1912 to house the families of miners who worked in the nearby Snowdon Colliery. The mines of the area are all closed now but you may see relics of this period of history as you make your way to Dover.

Your first night will be spent in Shepherdswell, which is the quintessential English village with its quaint cottages, ‘olde worlde’ pubs and village green. The village is one of the old coalfield parishes of East Kent and it is here that the North Downs Way and the Miners Way meet.

On day two you will soon pass Waldershare House. The trail will bring you through the parkland surrounding this palladian mansion which was once the seat of the Earl of Guilford.

Soon after this you will follow an ancient Roman road which will take you to Dover. With the roads proximity to Dover, and by extension, mainland Europe, it’s easy to imagine yourself walking in the footsteps of the Roman legions as they spread out to colonise the island.

The town of Dover which was known as Portus Dubris in Roman times is also known as ‘The Lock and Key of England’. It has been an important protective bastion throughout history, particularly during the Napoleonic Wars and the Second World War.

Dover is famous for its White Cliffs which are comprised of chalk and flint. This is Britain’s closest point to mainland Europe and during the Second World War the skies above it bore witness to the dogfights of the Battle of Britain. 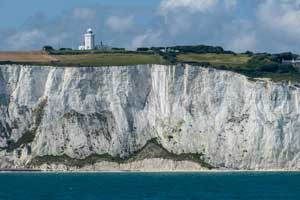 Dover Castle is the largest and arguably the most impressive castle in England and dates from the 12th century. It was expanded and upgraded over the centuries to reflect the various and changing threats which it faced. Along with the impressive fortifications and earthworks there are almost 5 kilometres of underground tunnels which saw extensive use during the Second World War when an expected invasion by Germany was thought to be imminent. During the war the town was bombed both from the air and by cross-channel guns which emphasises how close and real the threat of invasion was.

From Dover you will make the short ferry crossing to Calais to continue your walk on the Via Francigena. The rest of Section One of the Via Francigena will take you through the French Countryside to finish in the town of Wisques.