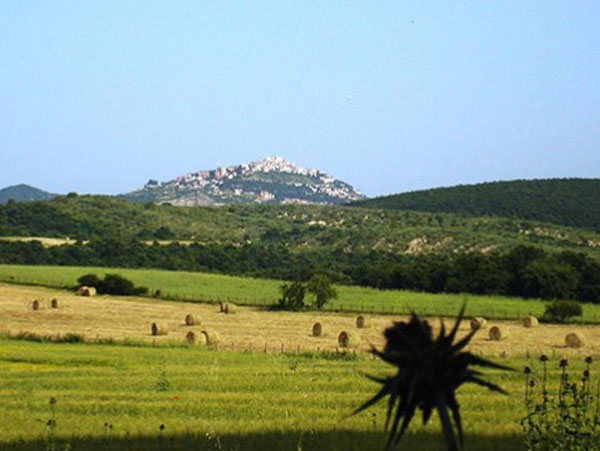 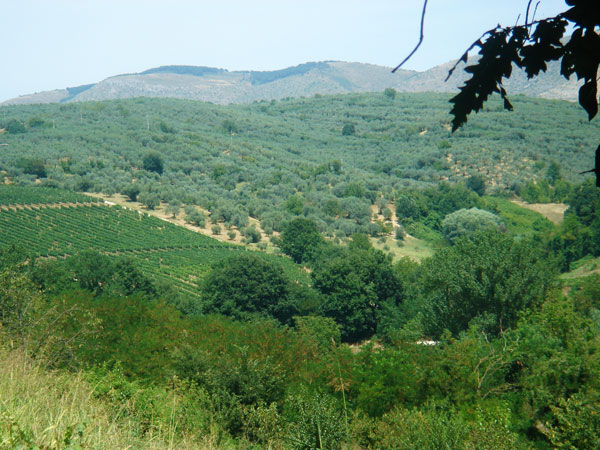 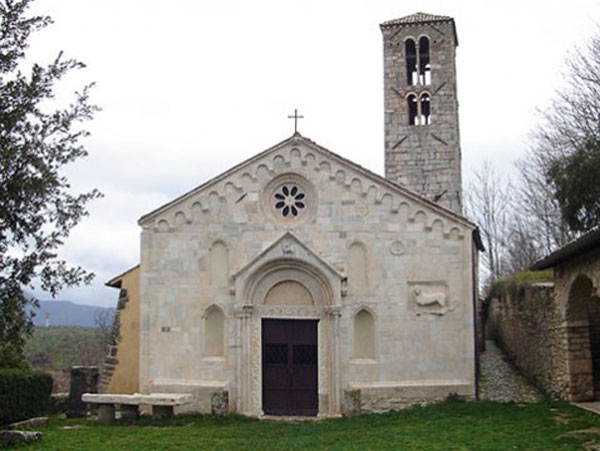 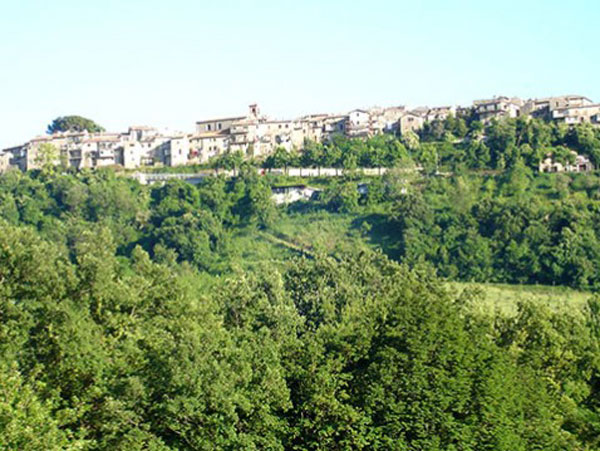 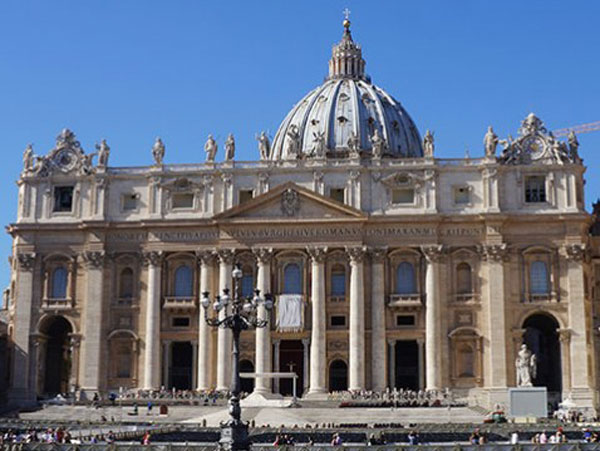 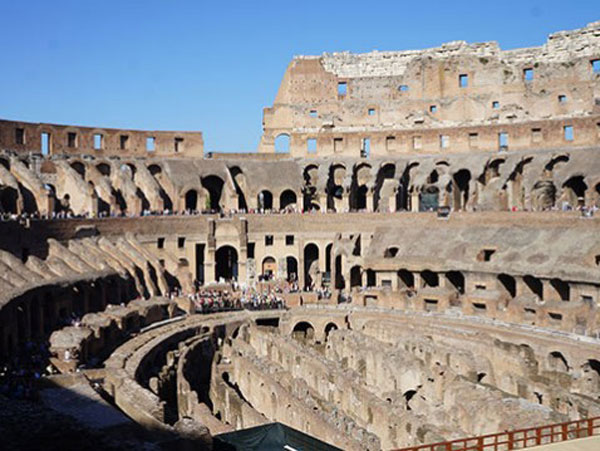 Via di Francesco Last 100km to Rome, the ‘Via Salaria’ is part of an ancient road system, developed by the Sabini peoples long before the foundation of Rome. Thirty centuries later, it is still the main road linking Rieti to Rome over the lush Sabinian countryside. Section 4 of the St Francis Way follows this ancient path across Rieti and takes you all the way to St Peter’s Square in Rome, the Eternal City. In this section of the Via di Francesco Last 100km to Rome, you will walk across the picturesque countryside, passing many historic buildings and quaint medieval villages along the way, as well as endless woodlands and olive groves.

Once in Rome, you can get your ‘Testimonium peregrinationis peractae’ certificate from the pilgrim’s office by showing your stamped pilgrim passport or credential. Via di Francesco Last 100km to Rome.

You will start your journey on the St Francis Way from St Maria Assunta Cathedral: leave the city by crossing the River Velino and heading south into a narrow valley. You will pass by Fonte Cottorella, the ancient springs of curative waters, and then follow a footpath to Kartodromo della Mola, near San Giovanni Reatino (425m). Continue upstream by the generally dry Torrente Ariana passing a Roman bridge, Ponte del Sambuco (480m), at the top of the valley. The path will now climb steadily, up to an asphalt road and further up to Osteria di Colonnetta (640m), then descending into a deep valley over the ancient Via Quinzia and up again towards the outskirts of Torricella Sabina and the convent of Collina del Sacro Cuore (610m). On your last stretch, you will walk along peaceful woods, olive groves and a few scattered houses, following a country road leading to Poggio San Lorenzo (490m).

From Poggio, you will continue your St Francis Way along olive groves, with your path winding its way up and down the pretty hills of the Sabina. You have many interesting sights along the way today: Monteleone Sabino, the archaeological area of Trebula Mutuesca, the Romanic church of Santa Vittoria and Poggio Moiano (470m) follow one another at short intervals. After a flat stretch in open country, your path reaches the T-junction of Strada del Brecciaro: one branch leads to Rome via Farfa Abbey; you will follow the other branch, over the rural hamlets of Santo Paolo Alto above and Santo Paolo Basso below, with sweeping views of Scandriglia and the mountains of Parco dei Monti Lucretili. You will continue your walking day amid olive groves to reach the little village of Ponticelli (330m), your stop for the night.

Today you will begin by walking over yet another hill covered with olive groves, with Orsini Castle overlooking the area between here and the Tiber Valley from the mountains above. You will then continue down again to Osteria di Ponticelli (240m) and crossing into the province of Rome, up to Pitirolo (310m), both no more than a few houses, then down to a full size village, Acquaviva di Nerola (210m); then further down then uphill again to the town of Montelibretti (220m).

From Montelibretti, you will now have full sight of the vast plane of the Tiber Valley, north of Rome. Across the lush countryside, you will reach the ancient Via Nomentana at Tre Ponti (a few scattered farms) and the little lake of La Muraccia and follow it down to its crossing with Strada della Neve (90m), in the municipality of Palombara Sabina. The landscape of the St Francis Way has now opened up into a wide area of low hills and vast fields, leaving the last layers of mountains behind. Over a quiet country road you will reach the hamlet of Grotta Marozza (100m) and past the motorway, to the city of Monterotondo (150m) and its Duomo della Maddalena.

From Monterotondo and over yet another hill, you will get down to sleepy Valle Ricca (50m), entering the municipality of Rome. Across the olive groves, fields and low hills of the protected area of Parco della Marcigliana you will be reaching the outskirts of the ‘Eternal City’, in the semi-rural borough of Cinquina. You are now following footpaths, along the low-traffic road Via di Tor San Giovanni, soon merging with Via della Bufalotta and, past the external ring-road (Grande Raccordo Anulare), into more densely populated areas in the area between popular Casal Boccone (45m) and elegant Montesacro. 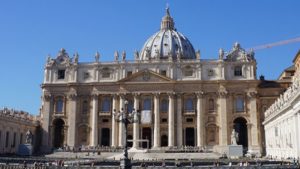 Today is your last walking day on the St Francis Way. From Via della Bufalotta you will continue over Viale Adriatico, down to Piazza Sempione and across the bridge over the Aniene River, that you will follow downstream, avoiding the city traffic on a pedestrian/cycling path. The path continues across Via Salaria, by the Great Mosque, the Auditorium and the Olympic Village, to reach Ponte Milvio. You will then cross to the other side of the Tiber River and follow another pedestrian/cycling path along its banks, passing under several bridges and enjoying unique views, down to the statue-lined Ponte Sant’Angelo. Upstairs to Castel Sant’Angelo and down Via della Conciliazione into the arms of the Bernini’s colonnade, you have reached your destination, St Peter’s Square!

No city in the world can rival the history, architecture and general grandeur of the Eternal City. Founded 2700 years ago, Rome long reigned as Caput Mundi, or Capital of the World. Monumental buildings like the Colosseum are reminiscent of the era when emperors like Nero and Trajan ruled the Roman empire. But today’s Rome also owes much of its beauty to the Renaissance period when new squares like Campidoglio were created and new impressive structures built, including the world’s largest church: the Saint Peter’s Basilica. Ask the FrancigenaWays.com team if you would like to book additional nights in Rome to explore this magnificent city.

(Option B) Take the local train to Tiburtina Station (€8), and from here to Rieti take a bus which takes 1hr 40 and costs €4.20 one-way.  Info: www.cotralspa.it

Rome Leonardo da Vinci – Fiumicino Airport 30km: There is a shuttle train (Leonardo Express) to the airport from Rome Termini Station, which takes about 30 mins (€14).