Summer has arrived and we are ready to party. Pack your sun glasses, sun cream and camera and head to some of the top summer festivals in Italy. If you are planning on walking the Via Francigena in Italy this summer than there is plenty of entertainment to be had along the way. From world renowned stars to ancient traditions, here are some of the exciting festivals taking place in the towns and villages along the Via Francigena. 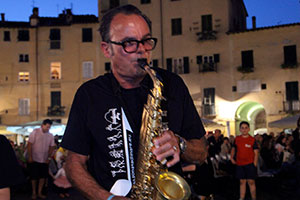 It is true that music brings people together. Lucca summer festival is well established as the epicenter of musical celebration for the summer in Italy. Every year artists from around the world line up to play at this epic festival in the walled town of Lucca. Famous acts such as the Pet Shop Boys, the Rolling Stones and Lauren Hill are headlining the stages at this years event.

For something a little different check out Caffeina Cultura in Viterbo as you start the last 100km of the Camino to Rome. The Caffeina festival takes place at the start of July each year. Over the course of ten days people gather to share stories through writing, acting and art. More than 40 events take place in many of the open air stages set up in the medieval centre of the city. Join the crowds as they gather in the many town piazzas to soak up the atmosphere. 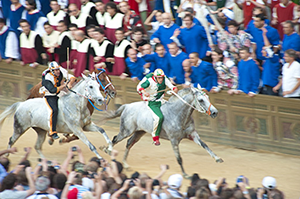 An ancient and action-packed festival, the famous Palio dates back to the 6th century. The main square of Siena comes alive with activity during the Palio race and pageant. 17 contrades (districts) take part in the race, each with it’s distinctive colours and crests. Attendance on race day is free but you should try to get there early to secure a spot to perch for the day. 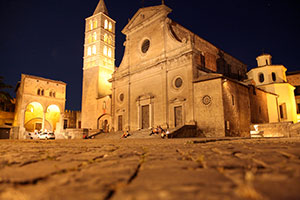 Are you planning on spending an extra few days in the ancient Italian capital once you finish your walk? Get a real taste of Rome as you stroll alongside the River Tevere when it lights up every evening. Pop-up restaurants, cafes, art and cinema are just some of the many features of this summer festival that make it extra special.

Festival delle Letterature: To be confirmed

At this cultural festival you have the chance to follow in the footsteps of Virgil, the ancient roman poet, engaging with the literary scene in Rome. 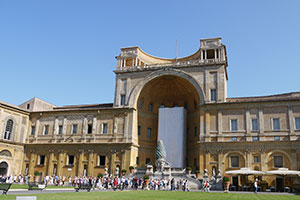 This literature festival takes place in historical venues throughout the city, including: the Basilica of Maxentius, the Piazza del Campidoglio and the Casa delle Letterature. A playground for your imagination, you can explore themes of “fear and hope”, real versus imaginary” and “simple versus complex”. Entrance to the many events is free but the spaces are limited so be sure to arrive a little early. Notable writers such as Salman Rushdie, Doris Lessing and Gore Vidal have all made appearances in the past.

These are just a handful of the many annual summer festivals in Italy.

For more information on any of our walking or cycling tours on the Camino to Rome trails please contact one of our Travel Specialists.