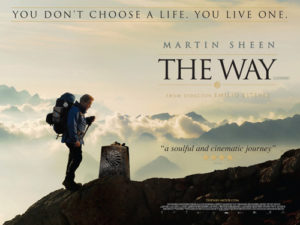 “You don’t choose a life, Dad … you live one,” says Daniel to his father Tom, a conservative, uptight eye doctor who never breaks the rules and lives life cautiously, the complete opposite of his son. In a flashback, it seems as if the two are just having a little family quarrel, when really it’s one of the most significant moments in their relationship and in the overall picture.
When “The Way” begins, we meet Tom (Martin Sheen), a lapsed Catholic, who has to fly overseas to St. Jean Pied de Port, France to collect the remains of his deceased son Daniel (writer/director Emilio Estevez and Sheen’s real-life son) and take them back to America. Daniel was killed in a storm in the Pyrenees while walking the Camino de Santiago on the first day of his journey.
The film’s title refers to the Camino de Santiago, a centuries-old pathway to the supposed burial of Saint James the apostle in northwestern Spain. The Camino, also known as “The Way,” is 800 kilometers long (or 500 miles) and is frequently walked by people from all over the world.
Instead of returning home, Tom has a spark of inspiration and decides to embark on the historical pilgrimage in honor of his son. On his journey he meets several people who tag along with him. One is a loud-mouthed Dutchman named Joost (Yorick van Wageningen) who decided to take on the trail to lose weight. A while later, Tom meets Sarah (Deborah Kara Unger), an angry Canadian who wants to forget about her past life.
Estevez uses the beautiful backdrop of the Pyrenees to capture Tom’s heartfelt and tough journey. The picturesque villages and gorgeous mountains are practically a character itself in the film. Though the lush backgrounds get a bit repetitive in the two hour long film, we feel as if we are walking the Camino with Tom.
Sheen delivers a fine performance, but it’s really the supporting actors that made this movie enjoyable. Wageningen, who we recently saw in Fincher’s “The Girl with the Dragon Tattoo,” really comes into his own in this film. Unger plays the sarcastic, pissed off female in the group and it suits her quite well. The relationship that develops between her and Tom is enjoyable to watch, as their characters frequently bounce off of each other. James Nesbitt does what he can with Jack, the drunken Irishman the trio meets along “The Way,” but the other two’s strong performances overshadow his. Thankfully these secondary characters were in the film or else it would have been one very long journey we would have to sit through.
Estevez could certainly have been busier in the editing room, and I would’ve liked to have seen more father and son flashbacks in the film. Still, we know for sure his heart is in the right place while directing.
The DVD presents special features that are fun to watch like “Camino Americana: Taking ‘The Way’ On The Road,” “Pilgrimage: Behind the Camera,” “Father & Son: Uncovering the Characters,” and the audio commentary by Sheen, Estevez and producer David Alexanian.
“The Way” is an emotionally riveting film that will make you laugh, cry and sometimes, yawn..
Feb 23rd 2012, Lauren Veneziani, http://bighollywood.breitbart.com/lveneziani/2012/02/23