While students cheered as Martin Sheen and Emilio Estevez walked on stage at Burruss Hall last night, Sept. 28, the visit meant much more for one professor. Annie Hesp is a Spanish professor who has a very personal connection to the Camino de Santiago — the setting of Sheen and Estevez’s new movie “The Way.”

The Camino de Santiago, or the Way of St. James, is a trail in the Pyrenees mountains of northern Spain that ends at the Santiago de Compostela, a church where the remains of St. James are rumored to be buried.
“The Way,” which was written and directed by Estevez and stars Sheen, follows the journey of a man, who loses his son. Along the trail, he looks for understanding and a greater meaning in life.

The Camino is considered to be the third most popular pilgrimage path in the world and stretches between 450 and 500 miles, depending on where a traveler starts. It can be walked, biked or driven.

“One thing that’s amazing about the Camino is that it’s hard to find a favorite place,” Hesp, who first traveled on the trail during her years as a doctoral student at the University of Michigan, said. “There are a lot of amazing moments and spaces.”

Hesp eventually wrote her dissertation on the Camino and how it intersected with the concept of community.
Hesp has traveled along the trail four times. She biked the path twice on her own and walked it twice, bringing students from the University of Michigan with her for her 2004 and 2006 visits.

She hopes to take a group of students from Tech to the Camino at some point, but for now, she is happy that Estevez and Sheen agreed to bring the movie to Tech.

Hesp first contacted Sheen and Estevez in person about coming to Tech at a conference in February.
The campaign to bring the movie to Tech got a push when geography instructor John Boyer joined forces with Hesp. Boyer and his 3,000-person World Regions class posted a Youtube video on Sept. 6 asking the actors to make the visit.

“Because of technology and the Virginia Tech community, we in this day and age can make contact and communicate with people who before this everybody said, ‘That’s impossible, you can’t talk to Hollywood stars, you can’t talk to prime ministers and presidents’” Boyer said.

Boyer said through the experience, his students have become more connected with each other.

“This class is bringing the juice big time — we’ve really stepped it up to another level here. That is frankly above any expectations I ever had,” Boyer said. “There’s a level of synergy that’s higher than usual for the World Regions class.”
After such a success, Boyer next hopes to have a class Skype chat with Burmese democratic leader Aung San Suu Kyi.
Hesp said she is grateful for Boyer’s and his students’ enthusiasm, and she hopes the movie will be just as inspiring for them as the Camino has been for her.

“I’m really excited to see the students’ reactions after the movie,” Hesp said. “For me the Camino was really life altering, and what I hope is that this movie inspires students to either go out on the Camino or chart their own path.”
After the movie showing, Estevez and Sheen held a question and answer session with the students, discussing their personal experiences and anecdotes with the filming process along the Camino.

They talked about their inspirations for writing and acting in the film, the effect of their Spanish heritage on the creation of the movie, and the promotion of the movie around the United States and at Tech.

“We believe that the best way to get this movie out was to actually take it to the people,” Estevez said. 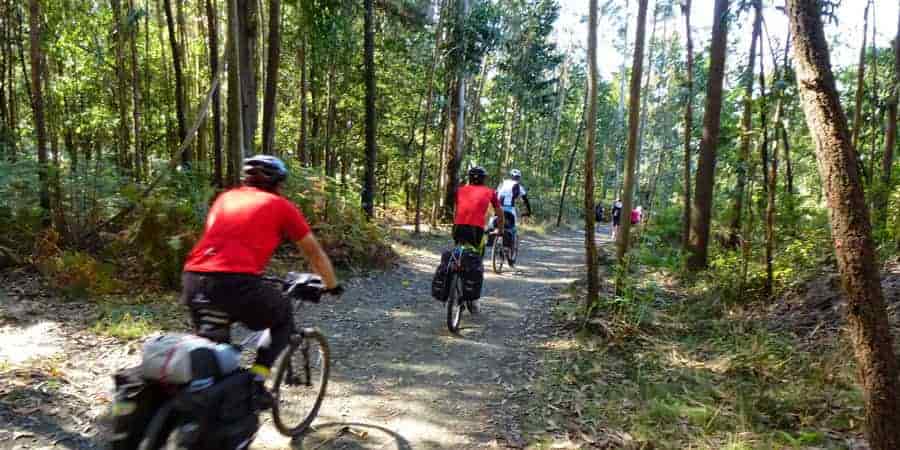 Cycling the Camino Frances from Ponferrada to Santiago Last 200km