Yes, today we have many wondrous means of transportation. Airplane tickets are cheaper than ever, while driving Europe’s new highways can be a delight. But of all the cities in the world I know, Santiago de Compostela is the only one where the most agreeable way to arrive is…on foot. 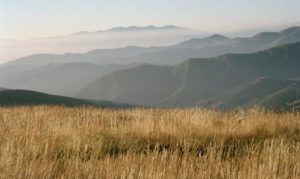 Just as each Muslim is required, at least once in his life, to retrace the Prophet Muhammad’s footsteps from Mecca to Medina, first-millennium Christians knew that blessings and indulgences awaited those who made at least one of the three sacred pilgrimages of the faith. The first led to Saint Peter’s grave in Rome, by which travelers—or Romeros—bore the symbol of the cross. On the second route, worshipers took palm fronds to Christ’s tomb in Jerusalem, just as the ancients did nearly two millennia ago to greet Jesus as he arrived in the holy city. Finally, there was the road to the grave of Saint Tiago—known in English as Saint James—whose mortal remains were said to be buried in the Iberian Peninsula on the night that a shepherd envisioned a field under brilliant starlight.
Not just Tiago but also the Virgin Mary were believed to have gone to the site shortly after the death of Christ to spread the Gospel and convert souls to Christianity. The place was called Compostela—the starlit field—and soon a city was born there. It became a magnet for worshipers from all over Christendom; known as pilgrims, their symbol was a conch shell. In its heyday in the 16th century, the road to Santiago de Compostela drew more than a million pilgrims a year, from all over Europe, who guided themselves by the light of the Milky Way. On their heels came believers humble and exalted, including Charles the Great, Saint Francis of Assisi, and Isabel de Castilla.
When I set out for Santiago nearly 30 years ago, starlight was the last thing on my mind. But one afternoon, there I was, in a café in León, surrounded by chattering travelers alight with stories about their trek. The town of Saint-Jean-Pied-de-Port was miles behind me, and I was already better than halfway to Santiago. In a matter of days, I would turn 39, and though I had no idea at the time, from that moment on nothing in my life would be the same. But here, on the road, the landscape ahead looked monotonous and flat. Behind me was no different, except for my own boot prints etched in the dust, which the wind would erase by nightfall. Everything seemed surreal. “What am I doing here?” I asked myself.
That question would haunt me in the days and weeks to come. How absurd, making a pilgrimage by foot at the turn of the 21st century! OK, so I was chasing my dream. Ever since I was a child I’d wanted to become a writer. But was I really ready to do what it took? After all, it’s so much more comfortable and far less risky to have a dream; but trying to live that dream could bring frustration or defeat. Besides, I was no longer a child.
Despite my doubts, I pressed on. My trek to Santiago would become my first book, The Pilgrimage, and open the door to many others.
You can do a lot of writing and rewriting in your head over 25 days and 800 kilometers. Along the way, I passed a number of guesthouses and pilgrims of all ages, each carrying the telltale conch. I met couples celebrating their golden anniversaries and chatted with stressed-out business executives who’d decided to take a month off to chill and rethink their lives. Everywhere I turned, there were students, young people who were just learning the gift of meeting and mingling with others like themselves, from all over the world.
A day’s walk from Santiago, I recall the small hill, Mons Gaudí, that pilgrims can scale to get their first glimpse of the iconic city and its immense cathedral at the end of the Milky Way, those torches that have been beckoning them through each incredible day of their journey. In the mid-1980s, a mere 400 people a year completed the walk to Santiago as I did. By 2010, some 450 were streaming into Santiago every day.
The stone church is the same as it has been for centuries, but by the journey’s end, it is the pilgrim who has been indelibly changed. Along the way, each traveler discovers how little he really needs to get along in life. After three days’ walking, everyone ends up shedding half the weight in his backpack. Lighten the load, preserve the body, and tend the soul. Those are the lessons of Santiago de Compostela, the city at the end of the road best taken on foot, as it has been for centuries, one step at a time.