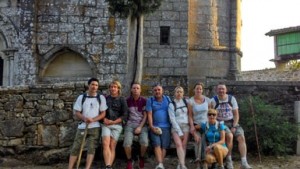 It was very difficult to stop myself from giving this traditional greeting to everyone I met around Dunshaughlin for at least a week after I got back from the Camino Way. The pain has long been forgotten and I can honestly say it was one of the best experiences of my life – everyone should do it!
*SharingPoint (www.sharingpoint.ie) is a charitable organisation set up in Ireland in February 2002 to help people, affected by alcoholism, gambling and drug addiction.

We arrived in Sarria on Friday evening and had a walk around town before dinner. I suppose we were probably a bit nervous as we didn’t all know each other but we soon bonded over a spot of shopping -the fruit was beautiful and fresh so we had to have some of that and Mabel and Sharon took very little time to find the bargain jeans. Well, you couldn’t leave them there : )

The accommodation was very comfortable each night and the food was great. We probably wouldn’t have been fussy anyway as we were so tired each night ( and hungry). One tip: always bring earplugs.
We were a bit relieved when we realised we wouldn’t have to set off at 6 each morning to beat the heat. Breakfast didn’t start until 7 so we had a good excuse.

We set off the first morning to walk a total of 23km to Portomarin. We had Jesus ( our guide) to lead the way and the weather was perfect. We were possibly all a bit nervous, wondering if we’d be able for it so we were all pleasantly surprised, I think, when we got to our first stop (4km) without noticing. At this stage Ian and James decided to leave us for dust. Unfortunately, they were so deep in conversation, they took a wrong turn and ended up doing 3km extra. They still got to Portomarin 15 mins before the rest of us and of course it wasn’t a competition, was it?
The terrain was a lot more hilly and rocky than I was expecting. When we got to Portomarin, we discovered that the whole town had been flooded by the construction of a dam in the 1960’s so the people had been re-housed further up the hill and the two churches had been moved to the new town, stone by stone. We could still see the foundations of the original town submerged in water as we crossed the (very high) bridge into Portomarin. Just a very steep set of steps between us and our hotel. Thomas had to run up them  Rocky-style. 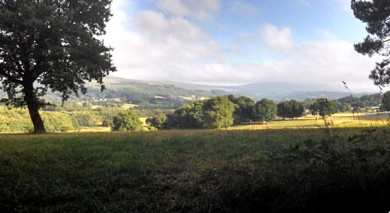 A swimming pool awaited. Then dinner and bed. All wrecked.

Up again to cover 25km. Again Ian headed off like a rocket and did international relations with everyone he met- French, American, Scottish even Irish- he managed to communicate with them all.
There were many stops along the way to get the Camino passport stamped and at one village you could get a free hug.  Some chose to walk ahead, some in little groups of 3 or 4 just chatting. Everyone was doing really well at this stage and there was not much talk of blisters, yet. The old knees were giving a bit of trouble so I ended up coming down some hills backwards. There were lots of people doing the same thing!  By that evening, knee bandages and compeed were being passed around freely and the best approach for dealing with blisters was hotly debated. Nurse Mabel’s methods were preferred though and she came very well stocked with everything anyone could possible need.

At this stage, some of us began to get very attached to our pilgrim staffs (ie. branches of trees specially selected as we went through the forests). They were being carved, polished and decorated with feathers, shells and ropes. If you left your staff behind, you had to go back and get it, no questions asked.

There is a tradition that you can pick up a stone to along the way and drop it later to symbolise dropping your burden. It’s usually a pebble but Dave had to bring something the size of a melon and carry it for 3 days.
We then had two shorter days. We got to Melide on the third day. Here we sampled Octopus, which was very nice and tender but the suckers were a bit off-putting. Jesus helped us finish it off. 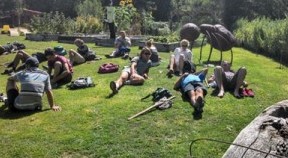 Then it was down to the local swimming pool to cool off. This wasn’t good enough for the lads who instead decided it would be better fun to swing, Tarzan style, into a nearby river on a rope-photos included. Next morning we headed to Arzúa.
Our last stop that day was Ribadiso. There was a really nice river which we couldn’t resist putting the poor feet into. David ceremoniously placed his
burden’ in the river too and looked much happier then!

The last stop before Santiago was Amenal. James decided to do a silent retreat and walked ahead of us but as he couldn’t order any food he had to abandon that idea. Following a dip in the pool again, it was time for dinner. I think the waiter felt sorry for us and brought us all two desserts after only a little nagging.

The last day, we had to set off at 7 to try to make it to Santiago in time for the noon pilgrim’s mass. We also wanted to stop at the mount of Joy, which is where the pilgrims get their first glimpse of the cathedral in Santiago, weather permitting. When we set off it was still dark but really nice to be on the last section of our journey. We were all a little sad it was nearly over too.

When we got to Palas de Rei, Jesus had told us of the tradition that the first to race to the top was the king. Robbie and I raced to the top and I let him win so he was the King for a day.

We were very happy to reach the mount of Joy and see the cathedral at last. We made our way into the centre of Santiago but I think more than one of us had the idea that we would like to keep walking until we came to the sea. I was definitely disappointed that our journey had come to an end. We crammed ourselves into the cathedral for mass. The story is that huge incense burner in the cathedral is really to mask the aroma of the pilgrims. They didn’t need it for us! so anyone who wanted to see the spectacle of the incense burner being swung around the cathedral had to come back again that evening. A lot did and whether you are religious or not, you couldn’t help but be moved by the ceremony. 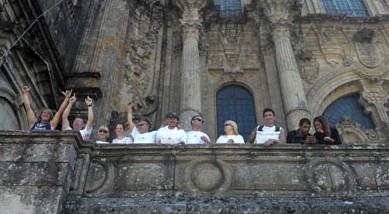 Having completed the journey and collected our stamps along the way , all that remained was to queue up to  collect the pilgrim. I was surprised that I really didn’t mind whether I got one or not.  I knew I had done the pilgrimage and I felt that was enough. Other people were brimming with excitement and trying to decide what type of frame they’d put it in. We all have different reactions to things, I suppose.
I’m glad I have the certificate now and everyone wants to see it.

We had our final dinner together and then went out to sample the ice-cream which was very good. Next morning we had a little time to look around. The local food market was incredible. The selection of fresh fruit and vegetables, fish, rabbits, pig snouts and trotters was hard to believe. Old ladies were selling bottles of homemade who -knows -what and begging us to try the cheeses. It was a crazy, wonderful buzzing place!

We met so many different people from every walk of life. Groups of ladies celebrating significant birthdays, mothers and daughters, fathers and sons, friends in their seventies taking it slow and steady, passing us continuously during the day. We liked to take a run at the hills and pass everyone out  and then stop for a long rest at the next cafe, where they all passed us out again. It must be a cultural thing, as Thomas said.

People were interested to hear the story of SharingPoint and as we waited in the airport, several of the people we met along the way who were returning to Ireland also, pressed money into my hand for SharingPoint. That was very unexpected and touching.
Can we go back again next year?!

*SharingPoint (www.sharingpoint.ie) is a charitable organisation set up in Ireland in February 2002 to help people, affected by alcoholism, gambling and drug addiction.

SharingPoint’s services are delivered largely through part-time voluntary work, funded by voluntary contributions and nominal client contributions towards minimal essential expenditure. A group of SharingPoint supporters walked the last 100km of the Camino de Santiago from 24-31 August, 2013, to raise funds for the organisation.