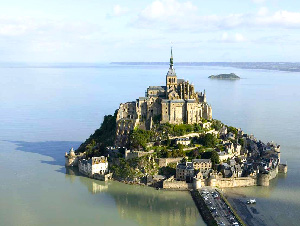 Mont Sain Michel, in North West France, is one of the most mysterious and breath taking spots along the Camino de Santiago in France. A pilgrimage destination for centuries, this iconic abbey is also the starting point of the Mont Saint Michel Way route of the Camino de Santiago. It heads down to the miraculous village of Saintes where it joins the Paris and Tours Way.

A monastery requested by Saint Michael the Archangel

According to the legend, Saint Michael the Archangel appeared three times to Saint Aubert, bishop of Avranches, ordering him to build an abbey on the rocky islet of Mont Tomb island. However Saint Aubert ignored all signs sent by Saint Michael until the Archangel burnt a hole in Aubert’s skull with his finger and convinced him. It took more than 500 years to complete the original monastery.

Situated 1km away from the shore and in the midst of vast sandbanks, the way to reach Mont Saint Michel has always been treacherous and dangerous for pilgrims. For nearly one thousand years, men, women and children took the roads called ‘paths to paradise’ hoping for the assurance of eternity, given by the Archangel of judgement ‘Peseur des ames’. Likewise the stunning causeway enhances the mystical character of the Mont Saint Michel as tides can rush in at incredible speed and get an impressive height, making the way a real challenge. As Victor Hugo described it ‘as swiftly as a galloping horse’, which explains the nickname ‘Saint Michael in Peril of the sea’ given to the sanctuary by medieval pilgrims.

A monastery that everyone fancied

Imposing, attractive and powerful, the Mont Saint Michel became a strategic key point to conduct battles and assaults especially during the Hundred Years War and English and French fought for its possession.

Back since its construction, Mont Saint Michel has always been a colossal dispute subject between Normandy and Brittany. This tension is also intensified by the fact that those two regions have always been rivals and both wanted to claim Mont Saint Michel for their region, as a symbol of their power. Brittany, once an independent kingdom governed by its own Celtic culture and language and, on the other hand Normandy famous for its Cider, Camembert and Calvados, make it clear have their separate cultures and should never be confused. Too proud and too stubborn, this rivalry is still alive today making the Mont St Michel Abbey a delicate debate to this date.

A monastery but not only

While the French Revolution was happening between 1787 and 1789, the Mont Saint Michel Abbey closed to be converted into a prison to mainly keep opponents of the republican regime. It stayed a prison until 1863 after Victor Hugo, influential French figure, held a campaign to relaunch it as a natural and heritage treasure. Since 1969 the Abbey has been home to a monastic community, ensuring the continuation of a spiritual presence. You can see monks currently living and working there, just as in Medieval Times especially if you join them for their daily mass at 12.15pm.

The best way to explore all the spiritual and hidden stories of the Mont Saint Michel is to visit this stunning pilgrimage site yourself or take a guided tour retracing its history at places such as the Grevin Museum, the Auberge de la Mère Poulard, the Archéoscope, the Musée Maritime or the Logis Tiphaine. You will also see and experience one of the greatest tides of Europe materialise in this magnificent bay.

Tempted to know how it feels to start your Camino de Santiago in this special pilgrimage site? the Mont Saint Michel Way offers you all along the route an unique sense of what pilgrimage is, with its legends and unexplainable phenomenons.

Contact our travel specialist to organise your pilgrimage on the famous Way of St James.