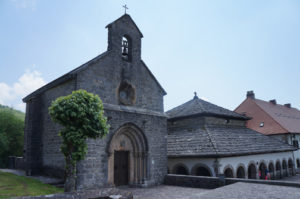 Roncesvalles is a small village and municipality in Navarre, northern Spain. It is situated on the small river Urrobi at an altitude of some 900 meters in the Pyrenees, about 8 kilometres from the French frontier. Roncesvalles is on Section 1of the French Way.

The village is famous in history and legend for the defeat of Charlemagne and the death of Roland in 778, during the battle of Roncevaux Pass, when Charlemagne’s rear guard was destroyed by Basque tribes.

The small collegiate church contains several curious relics associated with Roland. The battle is said to have been fought in the picturesque valley known as Valcarlos, which is now occupied by a hamlet bearing the same name, and in the adjoining pass of Ibañeta (Roncevaux Pass). Both of these are traversed by the main road leading north from Roncesvalles to Saint-Jean-Pied-de-Port, in the French Basque Country.

Since the Middle Ages, this collegiate church has been a favorite resting place for Catholic pilgrims along the Way of St. James, since it is the first place to have a rest after crossing the French Pyrenees. Every year thousands of pilgrims begin their way to Santiago de Compostela at Roncesvalles.