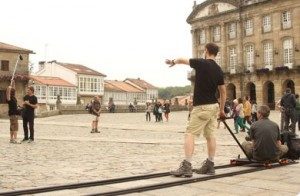 Visitors and pilgrims in Santiago in recent days might have been intrigued by a buzz of filming activity around the old town and the Praza do Obradoiro.

From Santiago Turismo, we hear the exciting news that Oprah Winfrey’s TV channel, OWN, will be airing a new documentary about the Camino de Santiago. The documentary was being filmed in recent days around Santiago de Compostela by New York production company Part 2 Production.

Part 2 Production is an award-winning company, producing documentaries for some of the most prestigious channels in the world, such as National Geographic and Discovery Channel.

Over 7,000 pilgrims from the United States walked the Camino de Santiago last year, according to statistics from the Pilgrims Office in Santiago.

Who knows? maybe we’ll bump into Oprah along the Camino soon!

In the meantime, at CaminoWays.com headquarters we are looking forward to seeing the documentary.