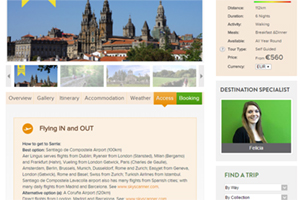 Planning your Camino for 2017? These are some useful flight routes for the Camino de Santiago and other Greenlife Tours destinations…

If you are flying from Europe, there are many direct flights available from European capitals to various points on the Camino routes. If you are flying from outside of Europe, airports such as Dublin in Ireland, London in the UK, Barcelona and Madrid in Spain, Paris in France and Lisbon in Portugal will be useful hubs where you can catch a connecting flight.

When planning your trip we recommend you check the dedicated ‘Access’ tab on our tour pages, including details and information on the closest airports and how to get to the starting point as well as getting back to the airport when you finish your trip. Here’s an overview of useful new flight routes for the Camino in 2017:

This is a seasonal flight starting in early March for 2017. Additional flights (up to 5 times a week) are available in Summer months: June, July and August.

Santiago is the most convenient airport if you are walking the last 100kms of any of the Camino routes, for instance if you are starting in Sarria but also Lugo, Ferrol, Vilalba, Ourense, Tui or Baiona. While Vigo Airport is closest to Tui and Baiona, there aren’t as many international flights available.

*Other airlines flying directly to Santiago de Compostela include Vueling (from London Gatwick and Paris), Easyjet (from London Gatwick; Basel and Geneva, Switzerland) and Ryanair (from London Stansted). In addition, there are many connecting flights to Madrid and Barcelona with companies such as Iberia, Ryanair.

This is a new route from March 2017, very useful if you are walking the Portuguese Coastal Way or Portuguese Way from Porto.

This new route is useful if you are walking the Arles Way Camino route in France.

This new route is very convenient for those walking the Portuguese Coastal Way from Baiona or the Portuguese Way from Tui. Vigo is just 90kms away from Santiago de Compostela and easily accessible by train and bus; and 140kms from Porto in Northern Portugal.

Ryanair also has direct flights from Edinburgh, Scotland, to Vigo and from Dublin to Porto city, now available all year round, which is great news if you’d like to walk the Camino in late Autumn for instance or early Spring.

This route is ideal for pilgrims from the UK looking to start in Baiona or Tui, for instance. Vigo is also only about 1 hour away by train from Santiago de Compostela and 1 hour and a half from Ourense if you are walking the Via de la Plata.

Vueling London to A Coruña:

This direct flight from London to  A Coruña airport is very useful if you are walking the Camino Ingles from Ferrol for instance but A Coruña is also only a short train ride away from Santiago de Compostela.

Pisa will be the most convenient international airport if you are walking the Via Francigena in Tuscany, starting from Lucca or San Miniato. Florence airport is closer but there aren’t as many international flights available.

Aer Lingus has just announced new routes from Vancouver in Canada, Los Angeles and also Miami to Dublin for 2017, in addition to their extensive flight connections from the US into Ireland (including cities such as San Francisco, Chicago, New York).

For more information about our Camino routes or to book your Camino trip, contact our travel specialists