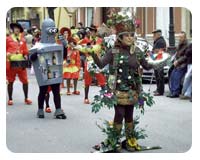 The earliest mention of a Carnival celebration is recorded in a 12th-century Roman account of the pope and Roman citizens watching a parade through the city, followed by the killing of steers and other animals. The purpose was to play and eat meat before Ash Wednesday, which marked the beginning of Catholic Lent – the forty-day fast leading up to Easter. The Latin term carnem levare, to remove oneself from flesh or meat, was used to refer to the festival.

The celebration grew in popularity over the next few centuries, spreading to other European cities and rural communities. Italians  called it Carnevale – flesh farewell – and the word was translated into Spanish and Portuguese as Carnaval, into English as Carnival, and into German as Karneval. Other terms used for the festival – Shrove Tide (fasting time), the Swiss-German – Fasnacht (night before fasting), and the French – Mardi Gras (Fat Tuesday).

By the 15th and 16th centuries Carnival had become a raucous tradition featuring boisterous games and masquerades adopted from a variety of late winter and early spring festival practices with pre-Christian roots. Carnival continued to evolve in Europe throughout the 17th and 18th centuries, while colonists from Spain, Portugal, and France carried this festival tradition into North and South America.

In the Galician region of Spain carnival is known as Entroido, or Beginning. It combines Christian traditions with ancient rites and is a vibrant part of colloquial life. You can combine this festival with a short Camino finishing in Santiago.

Monday is the “dirty” and “wild” day of the Entroido. The farrapada (ragging) in the main plaza of the village is an all-out mud war lasting more than two hours. Young men also go into the countryside to dig up anthills and collect the ant-filled dirt, which they shovel into sacks and carry back to town. They douse the ants with vinegar to wake them up and then run into the plaza flinging dirt and ants into the air, into peoples’ faces, or right down their backs and into their clothes.

The morena, or cow masquerader, appears briefly during the ant-throwing episode. This character acts like a mad cow loose in the square, butting people, lifting women’s skirts, and adding to the sense of chaos. Its carved wooden mask is attached to one end of a long pole that
the masker manipulates with aggressive gestures as he makes his way through the crowd. 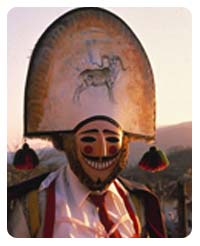 Peliqueiros run through in the streets on Sunday morning and the distinctive sound of the large bells hanging from their waists tells everyone that the entroido has begun. These masqueraders, authority figures in Laza’s Carnival, carry whips to hit bystanders as a reminder that it is time to play. The exact origin of their elaborate costume and mask is unknown. However, some locals say the Peliqueiros’ outfit and mannerisms derive from 16th-century tax collectors who carried whips and wore masks with grimacing smiles to intimidate the townspeople.

At dusk on Tuesday afternoon people gather in the main plaza for one of the last events of the Entroido de Laza, the testamento do burro, or Testament of the Donkey, which presents a satirical and mocking recounting of scandalous events that occurred in the village during the past year. Prepared and read by the testamenteiro, it is a rhymed verse written in the Galician form of Spanish. Using a fictional framework, the reader verbally “distributes” body parts of the donkey to the townspeople he is talking about. For example, a man who lost his pig from the back of his truck on the way to market received the eyes of the donkey so that he might keep better track of his animals.