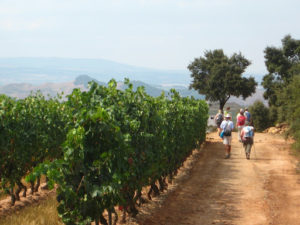 All trips are pilgrimages, at least if you approach them rightly. But a rare few are pilgrimages all by themselves, regardless of travelers’ motives.

Right now, the one on my mind is the Camino de Santiago, the Way of St. James, a 500-mile-long medieval pilgrims’ path across the top of Spain to the city of Santiago de Compostela.

The Camino is never very far from my mind, anyway – the experience of walking it is that powerful – but it’s back on my mind because of an unusual pilgrims’ gathering coming up March 7 in St. Paul.

It’s estimated that more than a million people walked the Camino during the Middle Ages, drawn by a great shrine at journey’s end, where the bones of James the Apostle were believed to rest. With Rome and Jerusalem, going to Santiago was one of the three most important pilgrimages in Christendom.

The numbers fell off as the world changed, and by 1988, when I first visited Santiago — by car, that time — only about 3,000 pilgrims a year came in on foot, nearly all for religious reasons, according to figures kept by the Catholic church there.

Then came a dramatic spike in the annual numbers of pilgrims and an expansion in their reasons for going.

By 1996, when I walked portions of the old pilgrimage route with a tour group called Spanish Steps, some 30,000 people were on the Camino de Santiago, and it had become the most popular hiking trail in Europe.

It’s become even more popular: In 2010, more than 272,000 people walked the Camino. They came from all over the world and for every imaginable reason, from traditional piety to personal challenge.

Whole villages along the way –  some merely sleepy, others moribund –  have come back to life to serve these travelers, making the pilgrimage one of Europe’s economic phenomena.

Now it’s a cinematic one, as well.

Last year, actor Martin Sheen starred in “The Way,’’ a fictional film about a grieving father who walks the Camino to honor a dead son. Sheen’s real-life son, Emilio Estevez, wrote and directed it, and they funded the movie themselves.

This year, another film is in the works, a documentary that follows five real Camino pilgrims on their journeys. Now in post-production, the documentary is the catalyst for the March 7 Camino gathering, to be held at 6:30 p.m. March 7, at Unity Church-Unitarian, 732 Holly Av., St. Paul.

Titled simply “The Camino Documentary,’’  the project has been endorsed by, among others, Martin Sheen;  the American Pilgrims of the Camino, an association of returnees and devotees, and  Judy Colaneri, founder of Spanish Steps, the group I traveled with. (To see a trailer, go to here.)

The new film’s director, Lydia Smith, who is trying to raise funds to finish it, will show a segment of the documentary, and she and Colaneri will talk about the pilgrimage, reminisce with Camino veterans and answer questions from people considering the journey. Admission to the event is free.
http://www.minnpost.com/arts-culture/2012/03/camino-de-santiago, Catherine Watson, 03/02/2012