Luiza’s last Camino. Luiza Kraner from Australia but living in Houston, Texas, had walked the Camino de Santiago seven times along many different routes. She photographed life along the way, recording her experiences, most of the time on her own, in over 30,000 pictures. Luiza passed away in January last year and this month, her husband Garry and her son Stephen, are walking with her one last Camino. The Kramers are walking the Via de la Plata on their first-ever Camino, to take Luiza’s ashes to Cape Fisterra and the Atlantic Ocean, Luiza’s final resting place. Her wishes had been for her ashes to be scattered by the sea in Fisterra, ‘where the Camino de Santiago ends and the sea that joins Europe and America begins’. 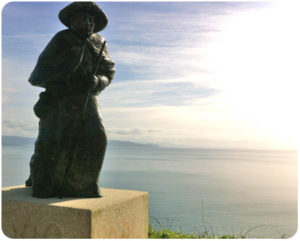 Luiza’s family are also preparing a photography exhibition on their return to Houston, to share with the public over a hundred of Luiza’s pictures, taken over ten years, during her many Caminos.