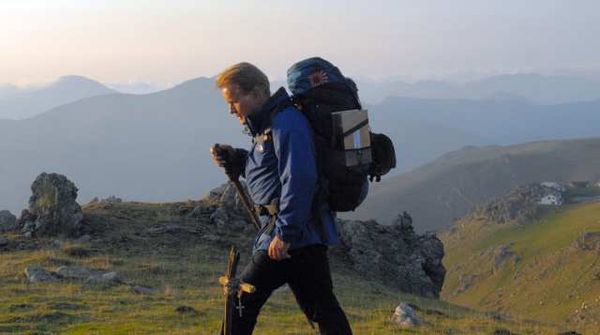 Photo: Martin Sheen in “The Way.” Credit: David Alexanian.
Emilio Estevez, eldest son of actor Martin Sheen and brother to Charlie Sheen, made his name in Hollywood independently of his famous father. He grew to fame using his birth name (rather than his father’s screen name) as a member of the so-called 1980s Brat Pack group of young actors in such films as “The Breakfast Club” and “St. Elmo’s Fire.” Estevez turned to writing and directing in the late ’80s and in doing so has worked directly with his father and brother several times.
Now, with his latest and perhaps most personal film to date, Estevez directs his father in a lead performance in “The Way.” The film, about a man’s decision to trek Spain’s Camino de Santiago (the Way of St. James) after his estranged son (played by Estevez) unexpectedly dies on the same nearly 500-mile-long journey, is a quiet meditation on healing and spirituality. “The Way” opens Oct. 7.
So what led to the two pairing up on a film? Sheen’s insistence that his son write a project for him. What led to shooting the film in Spain? Sheen has Spanish roots, and Estevez’s son lives there and was hired on for the project, making it a three-generation family affair.
Source : latimesblogs.latimes.com/movies/2011/10/live-chat-with-the-ways-emilio-estevez-and-martin-sheen.html, Los Angeles Times Blog 24 Frames, Elena Howe