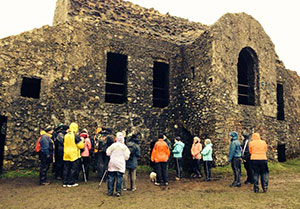 The last Camino prep walk of the year takes place this Sunday 26th October at 9.30am and we are heading to one of the spookiest locations in the Dublin Mountains: the Hellfire Club (also known as Montpellier Hill).

Hellfire Club or Hellfire Hill is the perfect walking location to get walkers in the mood for Halloween. It is a place surrounded by myths, popular legends and quite a colourful history.

Hellfire Hill or Montpellier is a popular family walking trail with great views of Dublin city. At the summit of the hill sit the remains of the 18th century hunting lodge (the Hellfire Club) that gives the hill its current name.

A cairn and passage tomb used to crown the summit of the hill, originally. When the hunting lodge was built by William Connolly in the 1700s, it is believed stones from the cairn were used in the construction. When a storm blew the roof of the lodge off shortly after being built, locals believed this event was the work of the devil and interference with the cairn had been the cause.

After Connolly died in 1729, the lodge and land were sold to a man with a group of ‘interesting’ friends. This group of ‘gentlemen’ were members of the Irish Hellfire Club and enjoyed organising wild parties and (rumour has it) even satanic practices at the lodge. There are many dark stories about the members of the Hellfire Club and the going ons at the hunting lodge. Some of the stories might be true some of them might be urban legends but there was at least one death recorded at the hill as a result of a duel in 1751, according to Irish author and hillwalking enthusiast Michael Fewer, who is the author of many books about walking trails across the country. There was also a very bad fire at the lodge after one of the group’s infamous parties in the 1740s. 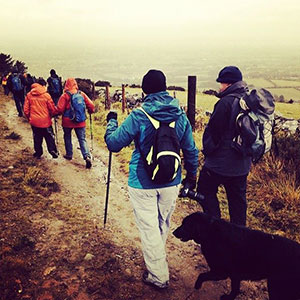 When the Loftus family acquired the land and Rathfarnham Castle in 1763, Henry Loftus built a new hunting lodge further down the hill. Some of the building materials from the Hellfire Club were stripped to be reused for the new lodge. The Hellfire Club may lack its original grandeur but it’s still relatively well preserved mainly because of its stone vaulted roof that has protected the building and kept it in quite good condition for three hundred years.

We won’t be scaring walkers away with spooky stories of the Hellfire Club this Sunday but we will be able to enjoy some of the best views of Dublin city and a bit of fresh air. This is an easy walk of 5km approximately but, as usual, we recommend you bring good walking shoes and suitable clothing for the day, as well as water and snacks.

The CaminoWays.com team will be busy at the Holiday World Show at the RDS Dublin the last weekend in January; so our popular Camino prep walk will be back at the end of February!

For more information about our prep walks, our Camino de Santiago holidays and other walking and cycling tours, contact our travel specialists