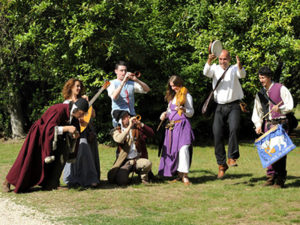 For those planning to walk or cycle the Via Francigena, the Camino to Rome, here’s our list of the most colourful festivals and events you will encounter along the route throughout the year. From national days to cow battles, religious events and celebrations full of history, these are some of the must-see festivals along the Via Francigena:

The battle of the queens, ‘Bataille de Reines’, is one of the most unusual and traditional agricultural festivals you will find along the Via Francigena. One of the most popular festivals in the Aosta Valley, these cow battles or challenges take place every year, starting in Spring and finishing, after 20 elimination rounds, with a grand finale in Aosta, in October. The challenges are believed to have been taking place in the region since the 1600s and the purpose is to establish the ‘queen’, the leader of the heard in a natural way. There is a pause in June and July, when the cows are moved to the mountain pastures. Similar battles take place in the Swiss canton of Valais in May.

Corsa dei Ceri, Race of the candles in Gubbio – May

On 15th May, the gorgeous walled town of Gubbio on the Saint Francis Way hosts its annual ‘candle race’, where giant candles are carried along the streets of the town by groups of local men. This impressive traditional race in honour of Saint Ubaldo, the city’s patron saint, has been taking place since the 12th century.

Joan of Arc Festival in Reims – May & June

A city chosen by many French monarchs for their crowning ceremony, Reims celebrates its heroine, Joan of Arc, with a colourful historic festival in late May-early June. For the Joan of Arc Festival, locals and visitors dress up in period outfits, taking Reims back to medieval times.

2nd June is Italy’s National Day and a holiday across the country. Republic Day or Festa della Repubblica is the day Italians celebrate their republic, with special events taking place in major towns and cities.

On 24th June, Florence (starting point of the Saint Francis Way) honours its patron saint, Saint John with its Festa di San Giovanni. Fireworks and the ‘calcio storico’ or historic football match in Piazza Santa Croce between the different districts of the city are part of the traditional celebrations. Another very special festival to see in Florence is the Festa della Rificolona, taking place on 7th September, also called the ‘Festival of the Lanterns’.

The city of Lausanne and its region, on the shores of Lake Geneva, are home to a busy calendar of events starting in Spring. The city hosts its annual Festival de la Cité in June, a whole week of open-air entertainment to delight locals and visitors. Further along the Via Francigena route, following the shore of Lake Geneva, the town of Montreaux is home to one of the most prestigious jazz festivals in Europe: Montreaux Jazz Festival, taking place in July.

Where: Lausanne and Montreaux, Switzerland – Via Francigena in Switzerland.

Where: Siena, Italy. Via Francigena in Tuscany.

The medieval town of Viterbo hosts its most special festival in September, in honour of Santa Rosa (St Rose). The highlight of this festival is the impressive Santa Rosa night procession where one hundred ‘facchini’, men belonging to the Santa Rosa fraternity, lift and carry a 30-metre high tower called ‘macchina’, lit with candles and topped with the image of Santa Rosa.

Where: Viterbo, Italy. Last section of the Via Francigena.

Lucca, on the Via Francigena in Tuscany, hosts one of Europe’s biggest comic and games festivals each year at the end of October. Launched in the 1960s, Lucca’s festival is a must-visit for comic fans.

Where: Lucca, Italy – Via Francigena in Tuscany.

Exquisite palates travelling along the Via Francigena in Tuscany, in Autumn, will enjoy one of the most famous truffle fairs in the country: ‘La Sagra del Tartufo Bianco’. The stunning medieval town of San Miniato has hosted this fair dedicated to the fine white truffle for over 40 years. Crafts, entertainment and truffle dishes take over the town for three weekends in November. Gubbio, Cittá di Castello and Pietralunga, all three towns on the second section of the Saint Francis Way, also host important Autumn fairs dedicated to the truffle from mid-October to November.

Where: San Miniato, Italy – Via Francigena in Tuscany; Gubbio, Cittá di Castello and Pietralunga on the Saint Francis Way.

*If you would like more information and to book your walking holiday on the Via Francigena, Camino to Rome, please contact our travel specialists.

written by Valeria
Operations Manager Valeria comes all the way from Southern Italy! She studied American and European Languages and Literature in Rome and holds a Masters Degree in Tourism. She lived in the South of Spain and cruised the seven seas before docking in Dublin.
More by Valeria
Contact Us