The festivities celebrated in honour of the patron saint of Spain and Galicia reach their peak during the so-called “ Fuego del Apostol ” (Apostle’s Fireworks), the Offering to the Saint and the exciting ceremony when the “Botafumeiro” is swung in the Cathedral. 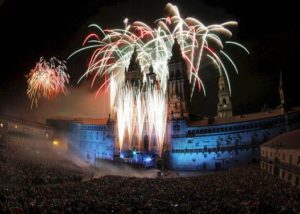 The feast day of Saint James is 25 July, but the festivities start some ten days earlier with the presentation of a full programme of exhibitions, theatre performances, street theatre and concerts. At 12 noon on 24 July, the cathedral bells ring out as a taste of the event that will occur that night. The Plaza del Obradoiro square fills with light and colour in a spectacle that transports visitors to a magical world: the fireworks in honour of the Apostle are accompanied by incredible pyrotechnical effects that represent the Gothic façade of the Cathedral. Regional dances and bagpipes are also part of the festivities. Concerts and open-air celebrations fill every part of the city to celebrate Saint James’s Day. The Offering to the Saint and the Botafumeiro take place inside the Cathedral. The latter is a large ceremonial incense burner that is swung vigorously over the smaller crossing, filling it with the smell of incense.