Food plays a major part in the culture of every country in Europe. Each part of a country will have their own styles, flavours and favourite foods. The full Via Francigena route covers 1,700 km from Canterbury to 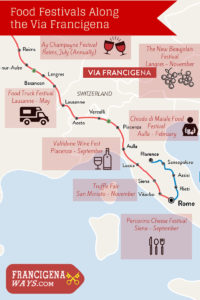 Rome, passing through France and Switzerland. In terms of foods to taste along the way, you could sample everything from the best cheeses in Switzerland to the best Italian pizza. We have picked out our favourite food festivals on the route so if you are in the region at the specified time of year make sure to stop by one of the following festivals:

This festival is also known as the Henry IV Festival and takes place on the second weekend in July each year. Considered to be the best champagne village in the whole region, Ay is the home of the likes of Bollinger, Gosset and Ayala, as well as Deutz & Gelderman. This festival combines lots of bubbly champagne and plenty of bubbly entertainment. Ay is most famous as the centre of the production of Champagne. The vineyards are located in the Vallée de la Marne subregion of Champagne and are classified as Grand Cru (100%) in the Champagne vineyard classification. Many prestigious Champagne houses own vineyards in the immediate vicinity, and several of the most famous producers are based in Ay. If you are walking the Via Francigena this is a sumptuous little detour. 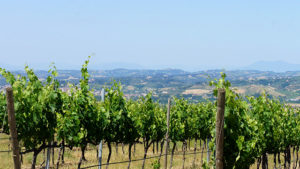 From November 18 – 22 the town of Beaujeu in the Beaujolais region of France celebrates the harvesting of the New Beaujolais wine. Kicking off in the early evening the day before Beaujolais Nouveau, the five-day festival features wine tasting, live music, a church concert and dancing. During the afternoon on Beaujolais Nouveau Day, a heated tent offers wine and a range of local foods for visitors to sample for the food market. In the evening, a torch lit parade honours the farmers that made the wine. Under French law, the wine is released at 12:01 a.m., just weeks after the wine’s grapes have been harvested. Fireworks at midnight mark the release of the new wine, which is then drank until dawn. 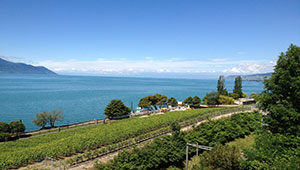 Located in the centre of Lausanne, surrounded by some of the most serene landscapes in Europe, this festival is a treat for anyone in the area. Twenty seven food trucks gather as part of the annual gastronomic initiative Lausanne à Table each May. For the past year Place de la Riponne has become an alternative lunch spot due to the arrival of a clutch of food trucks and stalls offering everything from burgers to Argentinean empanadas to Indian curry. Many of Lausanne’s favourite food producers and restaurants get involved, including Tanoshii, The Green Van Company, Street Kitchen Lausanne, El Gaucho Gourmet and The Rolling Chefs. 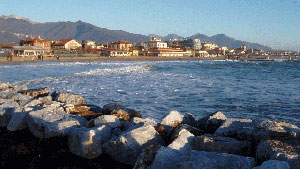 This festival takes place in February each year in the small town of Quercia di Aulla in province of Massa Carrara. Residents of the village and surrounding areas gather to celebrate the local lunigiana delicacy of the spicy sausage. This nail pork is an old recipe in which pork is ground,salt,spezziata and then cooked in small moulds. Festival goers get the chance to sample this tasty pork and food stalls serve up a variety of other local dishes. The first agricultural fair of the year coincides with the festival each year. 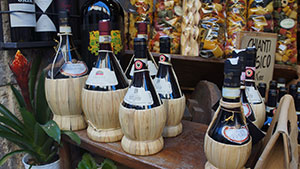 Sample the simple life at this tasty festival held annually in September in the Piacenza Valley. Different events take place to honour the renowned wines in the region. For wine lovers, tasting sessions of Ortrugo, Malvasia and Passito will be a chance to sample the subtle variations in aroma, taste and flavour that will satisfy any palate. All of the wines are accompanied by local dishes from the area, such as batarö (a local bread made in a wood-fired oven), tortelli con la coda (ravioli with ricotta and spinach), and cured meats like pancetta and salami. The flavoursome food is chosen to complement the wines. One of the festival highlights is the traditional tent that is set up in Piazza Madonne to showcase the 28 wineries of the region.

Famous for its tasty white truffles San Miniato is the perfect place to try a spot of Truffle hunting. This annual festival takes place on the last three weekends of November every year. Truffle lovers, chefs and food enthusiasts from all over the world gather in this charming village to taste and buy the freshest white truffles. This part of the Tuscan countryside produces 25% of Italy’s truffles. November is chosen as the best time to celebrate as it is the middle of harvest season. Activities at the festival include a market of food stalls, theatre performances and marching bands. 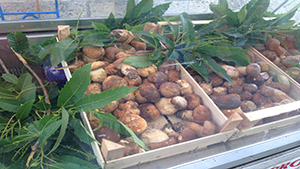 This special cheese festival takes place in the first week of September annually in the town of Pienza in Tuscany. The local cheese, food and traditions are celebrated with games and plenty of fun throughout the day. At the festival you can sample food specialities such as the famous sheep’s milk cheese. Games at the festival include a flag throwing competition and the a cheese rolling competition where participants roll cheese as close as possible to the post in the middle of the square. This tradition dates back to the renaissance period and was considered a peasant past-time. The cheese rolling competition is great fun and can get quite heated with over six neighbouring towns taking part.

Food festivals are a great way for visitors to taste local cuisine and get a feel for the traditions of a region. For more information on the Via Francigena or to book your next tour contact one of our Travel Specialists.