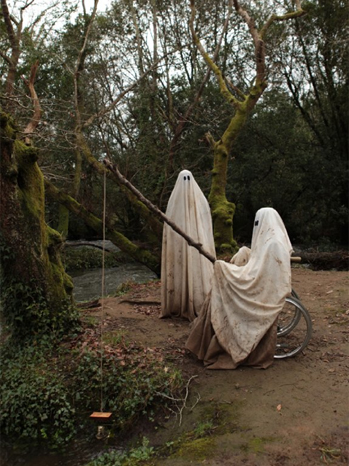 The ghostly characters aren’t the only ones who go on a journey in Catalan oddity Finisterrae, a bizarre, belated debut feature from 45-year-old writer-director Sergio Caballero. Initially perplexing and irritating, then slyly beguiling and endearing and finally quite dazzling, the film amply rewards patient, indulgent viewers who persevere through its berserk flights of fancy.
Audaciously unorthodox in nearly every regard — apart from the painterly high-definition digital-video cinematography by the superb Eduard Grau (A Single Man,Buried) — Finisterrae resulted from a decidedly unusual production process. Co-organizer of Barcelona’s esteemed experimental music festival Sonar (he’s responsible for the event’s bold visuals), Caballero first assembled an eclectic soundtrack, shot his footage around a vague itinerary-based plot and only later dreamt up the dialogue delivered in lugubrious Russian-language voiceover.
This enigmatic narration suggests we’re observing the spiritual quest of two recently deceased brothers, who find themselves “tired of being ghosts.” They seek rebirth by traveling on foot, horseback and occasionally via wheelchair over northern Spain’s famed pilgrim-path to the cathedral at Santiago de Compostela. They terminate their meanderings through bleakly scenic landscapes nearby at Cape Finisterre (Finisterrae in Latin) on the Atlantic Ocean’s spectacularly wind-blown shores.
Along the way, the unnamed duo (played by a perpetually shrouded Pau Nubiola and Santí Serra; voiced by Pavel Lukiyanov and Yuri Mykhaylychenko) periodically encounter all manner of weird phenomena, obtaining help and hindrance from beings both human and non-human. Scene-stealers include the pair’s faithful white steed, a proverbially wise eagle-owl and various charming reindeer (kudos to the critters’ trainers, tamers and wranglers).
Caballero is seemingly inspired as much by Monty Python and Alejandro Jodorowsky as more august, predictable antecedents like Bergman, Tarkovsky, Bunuel and Catalonia’s reigning auteur Albert Serra whose deadpan picaresques Birdsong and Honor of the Knights, the latter shot by Grau, are Finisterrae’s closest recent parallels. Proceedings have an air of freewheeling, daft absurdity that’s consistently amusing and sometimes laugh-out-loud hilarious — at least for those attuned to Caballero’s idiosyncratically wacky comic wavelengths.
What it’s all meant to add up to is anyone’s guess, but Caballero and Grau do achieve surprising moments of haunting transcendence amid the craziness — especially in a hypnotic coda in which an impressively antlered reindeer ambles in stately isolation through an opulent chateau.
Even the end credits are droll, beautiful and original, narrated over alluring, unsettling images of stuffed diorama animals in poses of frozen violence.
http://www.hollywoodreporter.com/review/finisterrae-film-review-97836 – Rob Hunter