Festivals on the Camino in September

September is a great time of the year for walking holidays and one of the busiest months on the Camino de Santiago. It is the last blast of the Summer in the continent, when temperatures are warm but not as hot making it ideal for walking and many festivals still take place along the way. Here’s a selection of interesting events you shouldn’t miss if you are walking the Camino de Santiago in September:

The first weekend in September, the gorgeous old town in Pontevedra on the Portuguese Way celebrates its ‘Feira Franca’, a huge medieval-inspired festival with plenty of music, activities, historic reenactments and of course, food! 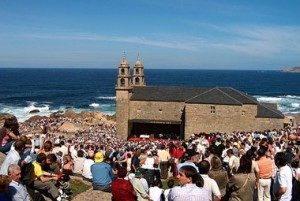 Muxía, the quaint fishing village on the ‘Costa da Morte’ (Coast of Death) celebrates its Romaría da Virxe da Barca in mid September. You will witness an interesting mix of pagan and religious traditions in a stunning setting. Many people visit this beautiful medieval shrine by the ocean with the mission of rocking (abalar) the Rocking Stone (Pedra de Abalar) and walk 9 nine times under the ‘Pedra dos Cadrís’ (Back Stone), both said to have curative powers. As with any festival across Galicia, traditional rituals have given way to days of music, parades and general celebration merriment in the town. Having suffered a devastating fire last Christmas, Muxía’s most famous sanctuary is currently being restored and should be finally reopened just in time for this special time of the year for villagers, visitors and pilgrims.  *You might also want to read our post about Fisterra and its legends.

Also on the Fisterra Way, the fishing town of the same name celebrates the Virxe do Carme festivities, patron saint of sea faring people and most fishing villages and towns.

The biggest festivities in Salamanca are dedicated to Santa María de la Vega, the city’s patron, and take place in early September. The festival originally started out as a traditional cattle fair but today the event is more about music and generally having a good time.

Celebrating Saint Mathew and the region’s most famous produce (wine!), the Rioja Grape Harvest Festival takes place in the city of Logroño every year in late September. Treading of the grapes, concerts, fireworks and children’s games are some of the activities included. Saint Mathew is also celebrated in the city of Oviedo on the Northern Way and Original Way. 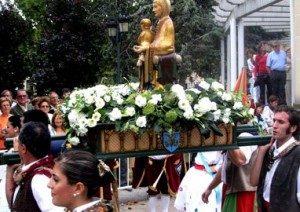 -More grape harvest on the Camino

Late September is ‘Vendimia’ time, grape harvest season, not just in La Rioja but also along the many other wine producing regions along the Camino de Santiago, such as: El Bierzo – Ponferrada along the French Way, Galicia – Rías Baixas along the last section of the Portuguese  Way and the Portuguese Coastal Way; Portugal for Vinho Verde and particularly Porto and the Douro Valley, and of course in France, home of Bordeaux. * You might also like to read our post: 9 Camino Wine Routes.

Catalonia celebrates its national day on 11th September every year. The ‘Diada’ is a public holiday and long-day celebration of Catalan culture and history across Catalonia. The date (11th September) marks the defeat of Catalan troops fighting during the War of Spanish Succession in the 18th century and was first celebrated in 1886. Many towns and villages in Catalonia host demonstrations as well as cultural events.

It is one Spain’s and Europe’s most famous film festivals, taking place in mid-September. It lasts nine days and includes a programme of film screenings and an exciting awards ceremony attracting many international actors, celebrities and well-known directors.

The city of Geneva, departing point of the Geneva Way to Santiago de Compostela, hosts its La Batie Festival the first two weeks in September. An interdisciplinary festival including theatre, performance, dance and music.

It is a very established photography festival taking place in Arles, Provence, every Summer, since the 1970s.

The third weekend in September, Le Puy en Velay goes back to the Renaissance for its Roi de l’Oiseau Festival. It is a colourful festival, where locals and visitors dress up in period costumes to experience life as XVI century Le Puy.

This year, the Vuelta, Spain’s biggest cycling race will be passing many towns and cities along the many Camino de Santiago routes. The final stage will be hosted in Santiago and finishing outside the cathedral. If you are on the Camino on these dates, you might catch a glimpse of the race! and if not, it is a good opportunity to see the race on the telly and admire the Camino and Santiago de Compostela at home. *You might also like to read our blog post: La Vuelta cycle race in Santiago.

For more information about the Camino de Santiago or to book your holiday, contact our Camino travel specialists.