Festivals on the Camino in June 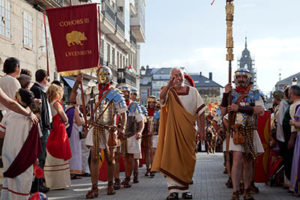 Walking the Camino de Santiago in June? We have gathered a list of interesting festivals you might enjoy along the way:

–Back to Roman times in Lugo – Original Way

The city of Lugo on the Original Way of the Camino de Santiago goes back in time for its Arde Lucus festival, each year in the month of June (13-15th June in 2014). This colourful, period celebration of the city’s heritage transforms Lugo into 3rd century Lucus Augusti, the name given to the city by the Romans. This popular festival attracts thousands of visitors every year: concerts, food banquets and period markets take place in Lugo during Arde Lucus, celebrating the city’s Roman and Celtic past.

The Feast of Saint John on 23rd June marks the official start of the Summer and is a popular celebration in many places along the Camino, including Santiago de Compostela, where bonfires are organised in parks and neighbourhoods. Saint John is one of the biggest celebrations in the coastal city of A Coruña, one of the traditional starting points of the English Way to Santiago. Bonfires, concerts and other events take place around the city. St John, or ‘Festa de São João’, is also the biggest and brightest celebration of the year in the stunning city of Porto, in Portugal (along the Portuguese Way to Santiago). Grilled sardines, garlic (careful, they will bang your head with it!) and fireworks all play an important role in the celebrations.

Many other places along the Camino de Santiago host Saint John and Midsummer celebrations: such as the Festa dos Fachos in Redondela, on the Portuguese Way; the Summer Solstice Festival in León, on the French Way,Sahagún and Saint John celebrations in the village of Sarria, on the last section of the French Way and popular starting point for pilgrims. Sarria also hosts a Medieval Market at the end of June (20-25th June 2014).

Fisterra, believed to be the ‘end of the world’, the most Westerly point by the Romans, also celebrates San Xoán. Many pilgrims like to reach this fishing village for the Summer Solstice and see the sun set over the Atlantic Ocean at Cape Fisterra. Fisterra is also believed to be the home of Ara Solis, an altar dedicated to sun worshipping by ancient civilisations; so it is a very unique place.

The Portuguese capital, Lisbon, starting point of the Portuguese Camino, hosts its biggest festivals this month also, including the popular Santo Antonio Festival on 12th June, where folkloric groups from different parts of town compete against each other. Saint Anthony is Portugal’s patron saint and is also said to be the ‘guardian of good marriages’ so 13th June is a popular date for mass wedding ceremonies in Lisbon. The city’s jazz festival and Faz Musica Lisboa celebrating world-wide music styles also take place this month in the stunning Portuguese capital.

The city of Logroño, also on the Camino Francés, celebrates its festival dedicated to its patron saint San Bernabé on 11th June.

Corpus Christi religious celebrations and flower displays take place in many towns and villages across Galicia in late May/early June, including Ourense, Muxía, O Pino, Arzúa and many others. One of the most picturesque is the Festa da Coca in Redondela (Portuguese Way), mixing Christian and pagan traditions in colourful displays celebrating the death of the ‘coca’. The ‘coca’ or ‘tarasca’ is a menacing mythical creature with the body of a dragon or a snake that lives in the sea or river.

Throughout the year, there are many gastronomic festivals all across Galicia, many along the Camino de Santiago routes. These popular festivals celebrate specific Galician products in season and give visitors an opportunity to taste traditional Galician food and do a bit of socialising with the locals! Keep an eye for them while you are on your way.

*For more information about the Camino de Santiago or to book your holiday, contact our travel specialists