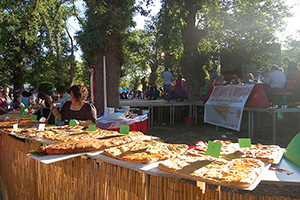 August is probably the busiest month in Galicia and on the Camino de Santiago, as far as traditional festivals and gastronomic events go. Most Galician villages and towns celebrate their patron saints and biggest festivals this time of the year so it is the perfect opportunity to savour the best local food (one of the most important elements of the celebrations!), enjoy the music and share the general merriment with the locals. Here’s a selection of the ‘fiestas’ you might encounter if you are walking the Camino de Santiago in August:

A Coruña, one of the starting points of the English Way, celebrates its ‘festas’ throughout the month of August, in honour of the city’s heroine, María Pita.

What you will find: plenty of concerts, craft fairs, folklore festivals and many more activities in the city’s liveliest month of the year, including one of Galicia’s biggest and most important book fairs.

Also on the English Way, the city of Ferrol hosts its annual Medieval themed Market/Fair.

Peregrina, in honour of the Pilgrims Virgin, is the biggest festival in the gorgeous city of Pontevedra. It takes place in early August, with activities for all age groups: fireworks, concerts, exhibitions, theatre, children’s workshops and much more. 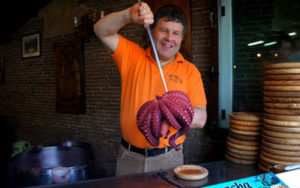 If you are heading to the ‘end of the world’ after arriving in Santiago de Compostela, remember to be around Fisterra the first weekend in August, as the fishing village is home to the ‘Festa do Longueirón’ at Praia da Ribeira beach, a gastronomic festival focusing exclusively on razor clams.

A festival dedicated to the famous Padrón pepper, mixing food and good music since 1978!

-Empanada and Tortilla in Silleda (Via de la Plata)

Silleda, on the last section of the Via de la Plata, hosts many gastronomic festivals throughout the year. The first Friday in August is time to celebrate the potato omelette, tortilla. The third weekend of the month is time for the classic Galician pie, empanada.

The tiny village of O Pino, in the outskirts of Santiago de Compostela, has been hosting a horse fair in early August for many years. In addition, in recent times they have added a Celtic inspired market, for a historic touch.

The beautiful town of Estella-Lizarra is in celebration mode in the beginning of August. For a whole week, Estella celebrates its ‘fiestas patronales’ so if you are on this section of the Camino this time of the year, prepare to eat, dance and party like a local.

Arzúa, on the last 100km of the French Way, celebrates ‘Festa dos Botes’, a special time for the town’s youngsters. Traditional games and music are a big part of this festival.

On the English Way, the seaside town of Pontedeume hosts its annual International Folklore Festival where you will see not only Galician regional dancing but other colourful dances and traditional attire from all over the globe. The town also hosts a Summer Carnival around the same date.

-San Roque Festivals all across Galicia and Spain

San Roque in mid-August is one of the most popular festivities in Galicia and many parts of Spain. If you are stopping in Melide (French Way), you should not only taste the famous octopus from A Garnacha (see Ernesto pictured) but also go for a quick dance at the town square to join their San Roque celebrations. 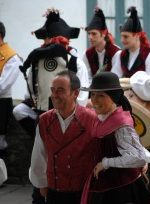 The hospitable village of Sahagún, on the French Way, hosts this festivity dedicated to visiting tourists every 15th August.

A similar festival dedicated to the tourist, Festa do Turista, is hosted in the seaside town of Baiona on the Portuguese Coastal Way, on 23rd August.

This traditional festival taking place in the seaside town of Viana do Castelo will give you the chance to see traditional Portuguese dance and experience the town’s annual ‘romaria’.

Astorga city celebrates its festival in honour of Santa Marta at the end of August, so this is the perfect excuse to stop a night or two in this charming pocket size city famous for its pink cathedral, chocolates and ‘mantecados’.

Carrión de los Condes is famous for its impressive monastery named after San Zoilo. At the end of August, the town honours its patron San Zoilo with its annua ‘fiestas’

The Battle of the Flowers is the biggest and most colourful festival in the beautiful coastal town of Laredo in Cantabria. The origins of this festival go back to the early 20th century, the so-called Belle Epoque.

*If you need more information about the Camino de Santiago or to book your Camino trip, contact our travel specialists