When actor-director Emilio Estevez wrote the story for “The Way” there was never any question that his father, Martin Sheen, would play the starring role. It’s a movie about a father and son, played by a father and son.
Sheen plays a California ophthalmologist, Tom Avery, whose free-spirited son Daniel (Estevez) dies in a storm just as he begins his pilgrimage on the Camino de Santiago de Compostela way – a centuries-old trek from France to Northern Spain.
Stricken with grief at the death of his only son, Tom determines to experience his son on a deeper level. He impulsively departs from his well-ordered life to finish his son’s journey for him. Tom becomes part of an unlikely foursome as others also on the pilgrimage keep pace with him. Touching moments of inspiration alternate between humorous scenes his idiosyncratic companions inflict upon him. 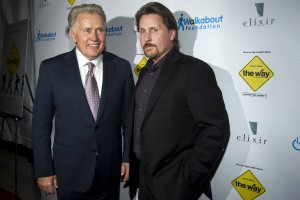 “The Way” is a road movie on foot, with breathtaking but sometimes treacherous landscapes. Filming took place on location in the Pyrenees Mountains. In an interview with the father and son duo, Estevez explained that to a large degree, the movie was a matter of what you see is what you get, or rather, whatever happened that day is what happened in the movie.
Unpredictability fit with the movie’s theme.
“It was a challenging shoot all the way from the Pyrenees to the ocean. When I was a younger director, I don’t think I would have looked at the gifts along the way,” Estevez said.
He said his approach was to be open to anything that happened during the filming.
“If it rained that day, then it rained in the movie that day,” he said. “And if Martin pulled his Achilles on the trail, then he would have been limping the next day.”
The process of being open permeates the movie’s message.
“Really living a life means being open to the possibility of everything,” Estevez said. “So often it seems hopeless to break the chains of our routines; to be a tourist again and look up. Often, we’re looking down and stopped being tourists in the world. Daniel is telling his father to wake up and get out of himself.”
For Sheen, the father-son connection in the movie went both ways. His own father grew up near Compostela, Spain, and he always had the goal of walking “The Way.” It starts on the French border and leads through Spain. The 500-mile walk goes through Pamplona – famous for the running of the bulls – and all the way to Galacia, where Sheen’s father was born and where, according to legend, the relics of St. James the Apostle are buried.
“I drove part of the highway after a family reunion,” Sheen said. “I came back and started telling Emilio all these stories and I told him, ‘You’ve really got to write a scenario – this is something waiting for us to do.'”
Estevez started reading up on the Camino and it became the inspiration for this father-and-son journey. The trek is considered more than just a test of endurance across dramatic terrain. It is about the transforming experience. Doing without technology and modern luxuries, plus the physical and mental challenge, are all part of the process of revealing the essence of our imperfect selves.
“The theme is that we are all imperfect and God loves our imperfections,” said Sheen. “Our culture says, ‘go take this pill, or go to this plastic surgeon and you will be happier,’ but none of that makes us happier. The film celebrates our wonderful imperfections.
“I hope people will embrace the idea of healing and community,” Sheen said.
For him, the movie is something even more. “I have never been offered this good of a part in the last
30 years,” he said. “It was a gift from my son.”