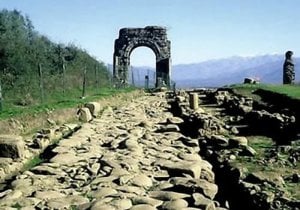 To the north of Extremadura rise the sierras of the Sistema Central, composed of the Sierra de Gredos, the Sierra de Béjar where it reaches its highest altitude in the Calvitero at 2401 m and Sierra de Gata which separates Extremadura from Castile. In the center is the Sierra de las Villuercas which reaches an altitude of 1603 m on the Pico Villuercas, Sierra de Montánchez and the Sierra de San Pedro, which form part of the Montes de Toledo. To the south rises the Sierra Morena which separates Extremadura from Andalusia with Sierra de Tentudía where the highest altitude of these mountains in Extremadura is Pico Tentudía with 1104 m. It is an important area for wildlife, particularly with the major reserve at Monfragüe, which was designated a National Park in 2007, and the project of the International Tagus River Natural Park (Parque Natural Rio Tajo internacional).
Extremadura was the source of many of the most famous Spanish conquerors (“conquistadores”) and many towns and cities in America carry a name from their homeland: Mérida is the name of the administrative capital of Extremadura, and also of important cities in Mexico and Venezuela; Medellín is a little town in Extremadura, but also the name of the second largest city in Colombia; Albuquerque is the largest city in New Mexico and its name is due to a transcription mistake of Alburquerque, another town in Extremadura. King Ferdinand II of Aragon died in the village of Madrigalejo, Cáceres in 1516. Pedro de Valdivia founded numerous cities in Chile with names from small villages in Extremadura, such as Valdivia and La Serena. The capital Santiago de Chile was founded as “Santiago de Nueva Extremadura” (Santiago of New Extremadura).
Wild Black Iberian pigs roam in the area and consume acorns from oak groves. These pigs are caught and used for the cured ham dish jamón ibérico. The higher the percentage of acorns eaten by the pigs, the more valuable (and expensive) the ham. Iberian Ham that can boast an acorn-fed average of 90%+ (of the pigs’ diet) can be sold for more than twice as much as ham whose pigs ate on average less than 70% of acorns, for example. Extremadura, is known for the different ways of preparing the Iberian pork and the mutton. The main characteristics of the traditional Extremaduran cuisine are its simplicity, its lack of clutter and its low cost. It is also a cuisine reflecting a generous spirit, for many of its preparations used to be cooked in large pots to share with visitors, friends and neighbors. The resulting dishes are eaten with local bread.
Among the pork or mutton-based dishes, some of the most well-known are the callos con manos de cerdo (tripe with pig’s feet), caldereta de cordero (mutton stew), cabrito en cuchifrito, frite de cordero (mutton fry) and the cabrito a la hortelana (lamb stew with vegetables). Extremaduran chanfaina is a rich stew of mutton liver, brain, heart and kidneys cooked with a mixture of bay leaves, garlic, bread crumbs and boiled eggs. Traditional Extremaduran gastronomy includes other meats, like hen (gallina), which is one of the main ingredients of the emblematic cocido extremeño stew, hare arroz con liebre (rice with hare) and frogs ancas de ranas fritas (fried frog legs). It also includes local fishes like the tench tencas fritas (fried tenches) and trout truchas con jamón (trouts with ham), and even a certain large lizard in a regional speciality known as lagarto con tomate. This dish is made by frying slices of lizard in olive oil, after which they are stewed with tomatoes and onions on a slow fire in an earthenware pot. Among the basic popular dishes the ones based on chick peas are dominant. Other main ingredients are, habichuelas (beans), potatos, pumpkin, chestnuts, onions and bell peppers. The most famous dishes of Extremadura are the cocido extremeño, the potaje de garbanzos y judías blancas (chick pea and bean soup), the sopa blanca de ajos (white garlic soup), the potaje de castañas secas (chestnut soup), the olla con “asaura” (a stew with offal and blood), the Ajoblanco extremeño and the gazpacho extremeño (a variant of gazpacho with ham).