Camino Culture Which Camino Way Should You Choose?

There are many Camino de Santiago routes coming from different points across Europe; the most popular come from France, Portugal and different parts of Spain. Which Camino Way Should You Choose? 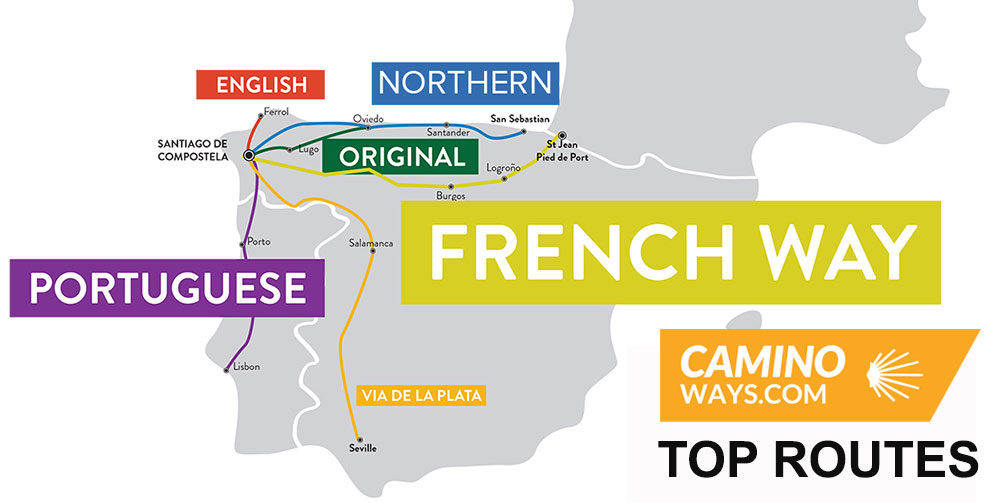 Which Camino Way Should You Choose?

The beauty of the Camino is that there are many routes to choose from and you can start at any point, making it as short or long as you like:

The Last 100km: From Sarria to Santiago

The last 100km of the Camino Frances route is the classic Camino experience. This is the most popular stretch as you can get your certificate in Santiago and it can be completed in just a week. You will walk from Sarria to Santiago de Compostela across the green Galician countryside, meeting many pilgrims along the way.

The Camino Frances of French Way is the most famous route of the Camino, featuring in movies such as Martin Sheen’s The Way and books such as Paulo Coelho The Pilgrimage. The Camino Frances starts in the French Pyrenees and crosses the La Rioja wine region, passing fantastic cities such as Pamplona and Burgos, before reaching the stunning mountains of León, the Templars Castle of Ponferrada and finally Galicia across the wonderful O Cebreiro mountains.

This is the second most popular Camino route. Starting in beautiful Lisbon, the Camino Portugues takes walkers across beautiful villages, unspoilt rural landscapes and UNESCO sites in Portugal such as Porto before reaching the South of Galicia.

This coastal Camino is quickly becoming a favourite, particularly for Summer months. Starting in wonderful Porto, the route takes pilgrims along the Atlantic Ocean, stopping in seaside villages on the way. The route takes in the scenic shores of Northern Portugal and the Rias Baixas in Galicia.

The Camino del Norte, or Northern Way, is another stunning coastal Camino: it starts in chic San Sebastian, in the Basque Country, and follows the lush Northern coast of Spain into Cantabria and Asturias. You will get the chance to sample the region’s delicious cuisine and go for a swim in one of the many beaches along the way.

The Camino Primitivo is the oldest and first Camino route. This is a mountainous and more challenging Camino route, starting in the city of Oviedo and crossing the mountains of Asturias into Galicia. You will get rewarded with peaceful and magnificent views. Highlights also include city of Lugo with its spectacular UNESCO Roman wall.

The Camino Ingles is the route traditionally taken by pilgrims from Britain and Ireland who would have arrived by boat to the Northern shores of Galicia and continued on foot towards Santiago de Compostela. This is a short Camino, starting in the port cities of Ferrol or A Coruña. Along the way, you will stop in lovely historic towns such as Pontedeume and Betanzos.

Camino de Fisterra and Muxia: to the end of the world!

The Camino to Fisterra or Finisterre Way is the only route starting in Santiago and takes pilgrims to the ‘end of the world’, Cape Fisterra, on the rugged and beautiful Atlantic Coast. The Cape, on the Costa da Morte, has a mystical allure for pilgrims. We recommend you continue to Muxia to admire its sanctuary and fascinating ‘magic rocks’.

Via de la Plata: from Seville

Via de la Plata is the Camino for adventurers, the road less travelled. The trail starts in the fascinating Andalucian city of Seville and heads North across rural landscapes but also passing beautiful historic cities or wonderful culture and rich Roman heritage such as Merida, Salamanca and Ourense.

The Le Puy Camino is a truly spectacular trail, starting in Le Puy-en-Velay in the heart of France with its imposing cathedral and volcanic landscapes. Le Puy Way is the most popular Camino route in France and a classic trail, passing some of France’s most beautiful towns such as Conques, Cahors and the picturesque Lot Valley. It is also known as Via Podiensis.

How to choose the right Camino route