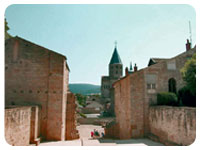 The less walked French section, from Cluny Abbey to Le Puy is a very attractive section of the Camino. Most French pilgrims start at le Puy, going to the border town Saint-Jean-Pied-de-Port where they’d pick up the hoards heading across the north of Spain. However, to Le Puy is about 300km.

We started on February 17th 2011. Madness I suspect M. Sotty the kindly bearer of our passport in Cluny surely thought. Still winter and no way the Aubrac would be passable. He gave us great advice though. Throw away the walking boots and get light Gortex ones. Light pack- of this I didn’t need to be convinced. Six kg for me, ten for my partner and this included a GPS and a light computer. And take piles of blister prevention and cure which we dutifully did. But I also washed our socks every night religiously and hung them on the heaters- one of the advantages of winter. We never got one blister though saw many younger tougher people fall by the wayside with them! 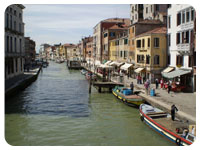 We took it reasonably easily the first week, days of 19 and up to 26 km, but also a 13km one when I thought my knee might have been injured (nothing a bag of ice couldn’t fix). We stayed in a variety of accommodation, B&B’s and small hotels, one monastery dormitory which we had all to ourselves. All booked weeks in advance,  but where ever we went a carafe of wine was always supplied (we cooked and brought our own at the monastery). The French know how to look after their walkers! We were fussed over. By the B&B owners (whom we named: Mme Rouge with the red hair, Mme Damp who all but adopted me but her back room was moist to say the least, M. Chef who looked after pilgrims as a way to have someone to cook for – and could he cook!). People stopping us in the streets excited about our quest (we didn’t tell them we were only going to Le Puy, or so we had thought), telling us about their own Camino, patient with our basic French.

Food never tasted so good. Hot pain aux raisins straight from the bakery as we left in the dark of the morning. Three pizzas one night, most days at least three pastries and I still lost weight! 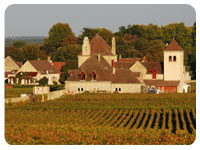 We were very lucky with the weather. Only one day when it snowed as we walked, and sheltering in the alcove of the Montarcher church steps my fingers lost all sensation. But it was pretty, and fun. For one day though! My bunions continued to ache but after only a five minute rest I could go for an hour. Our feet were always tired but all was forgotten as soon as we ate- and drank. In all this time, we saw only one other pilgrim, a 19 year old Belgium with a 21 kg pack and a buggered knee. These two facts were closely connected! He was very sweet and each took pity on him and found him cheap or free accommodation. With gave him food and company on and off all the way to Conques. 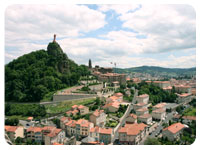 Beautiful French countryside, hills that went on forever, spectacular views, quaint villages, remnants of past pilgrimages, crosses at every corner, a house with the sign of the Templars, this was the most beautiful part in retrospect of the entire journey. If not this, then the next section. Dragging ourselves into villages frozen, but relying on the guidebooks comments that the coffee shop or B&B was always open…. well except for Wednesdays (or whichever day you were there- days off for businesses seemed random), when their daughter is having a baby or … always doesn’t mean winter Madame!

When we saw the two major hills of Le Puy, one topped with a monastery and the other with Mary, we felt as if we were running. Over a celebratory dinner there was no question. We would of course continue to Saint-Jean-Pied-de-Port.