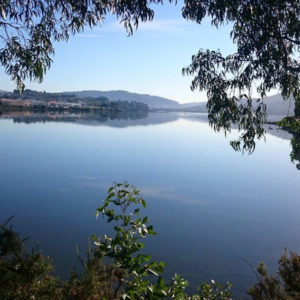 Eamonn reports from the #CawleyCamino 2016. Day 1: walking the first day of the Camino Ingles, from Ferrol to Pontedeume, 29kms.

We care for this group so much that Phil and I had them under lock and key in their hotel rooms by midnight…and then we closed the bar!

So it was a bright and breezy lot that hit the mean streets of Ferrol at 8.30am for a long challenging day’s walking. At dinner last night Owen, a dyed in the wool Dub, debated football with Kerry’s finest brothers Eamon and Paudi. Eamon, unlike myself, had one N removed from his name for being bold as a child. Anyway after much discussion we decided that it’s Dublin for the Sam Maguire and Kerry for the holidays!

On through the streets we rambled in first light past the docks and through the town centre, past some unlovely industrial areas before we could see the sea again and this time in a more picturesque setting. Cyril, a proud Tipp man, happily exiled in Tramore is happy for the new All Ireland Hurling champions, as is Michael Cuddihy who hasn’t been to bed since Sunday!

On we went on some nice springy decking which was a relief from the burning pavements towards Neda with some pit stops along the way and the group now well spread out. Uneven forest paths were next but the shade was welcome and we hogged it. Dubs Ger and Fiona recommended some French Sauvignon called Albariño that might suit my uncultured palate, and they should know, Ger is a wine supplier. Less sulphites are better for you…

A brass band and some fireworks greeted us into Neda, but sadly it wasn’t for us… it was Festival Friday. The going was getting tough now as the midday sun loomed and when a woman opened a car door on me on a busy pavement I nearly fell into her lap but hadn’t got the heart to ask her could I have a lie down on her back seat I was so tired! I met Wicklow ladies Mary and Bernie coming back towards me outside Neda, with that Kerry brother, yeah you’ve guessed the one N Eamon, and I thought they were doing a lap of honour, but no, just a wrong turn. 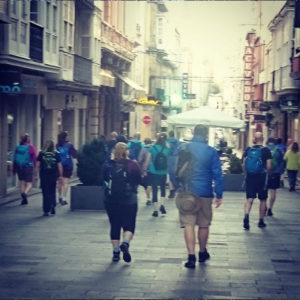 We proceeded with caution and stopped for coffee in a busy cafe full of, yes you’re right, the rest of the group… they must love us Irish big spenders. After what seemed like an eternity we finally reached the lovely beach just before the Pont of Pontedeume and Michelle from Cork took off like a dervish and ran into the sea…well she did change into her togs first! She has already seen Bruce Springsteen and Don Henly in Dublin and Cork concerts this year.. a keen musico! Must be due a request on Phil’s show soon.

What a joy to finally reach the calm cool interior of our hotel and hit the bath for a welcome soak. Tomorrow a kinder 19.5 km from Pontedeume to Betanzos, we hope.