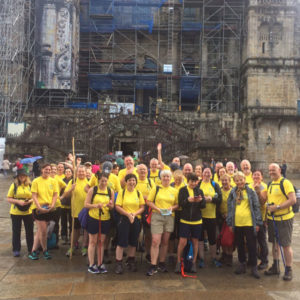 It is the last day of the #CawleyCamino 2016! Spirits are high despite the rain, as the team approaches Santiago. Walking from Sigueiro to Santiago 16kms… or maybe 11km. The final frontier.

I don’t really think that anything prepares you for the sense of achievement,accomplishment and sheer unadulterated joy that you experience when entering the wonderful Cathedral Square in Santiago. Forty nervous pilgrims set off less than a week ago mostly unknown to each other and filled with anticipation of what lay ahead.

But I digress… last night was another banging sing song that even different hotels couldn’t twart, so some departed, some stayed and some slept. Each to his or her own. It must be said that Jaime, our guide’s rendition of Ireland’s call had them swaying in the terraces and when he admitted that he really wanted to be Irish sure there wasn’t a dry eye in the house! Whaddaman… and he is a fine stick maker too.

Speaking of sticks Tim from Listowel had a 7 foot beauty that ensured respect and there was no way he wasn’t getting into that square in Santiago… bit of an Irish Samurai look really.

Last night after dinner Shane from Galway gave us an impassioned address about his self founded charity, the Manuela Riedo Foundation, in memory of a beautiful Swiss girl who was raped and murdered in Galway within hours of arriving in the city. This is an organisation that is entirely run on a volunteer basis with no salaries being paid to staff. His words gave us an appreciation of the isolation and guilt that victims of sexual abuse harbour within until help is available. And his organisation is clearly offering that much needed help. Talk to him or go to their website if you would like to help too.. .he is wisely thinking of a Camino trip for fundraising purposes and has a Black Tie Ball coming up in October in Galway. Good opportunity to meet again.

Heavy rain was audible during the night, with a bit of thunder and lightening thrown in too, so we feared the starting conditions, and we were glad to exit the main road and leave the hurtling traffic behind in poor visibility. Uneven sandy paths dotted with different sized stones made underfoot conditions treacherous but we had the heads down into the rain in a multiplicity of rain gear. Every step forward was a step closer to our goal and so we proceeded. 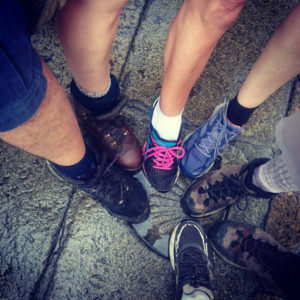 Breda Bronte and Anita from Roscommon were scorching it up front as usual, these are our legends of walking… Superwomen both… and super women too. The pair of them would put gazelles to shame and people in cars and on bikes have reported back that they were passed by Anita striding out and carrying two full bags of groceries. And I saw one of the… ahem… ladies trying to trip a poor runner who had the audacity to pass her today.

Poor Niall from Waterford needed three crutches as he ascended today, two sticks and his lovely partner Sinead… they say he has blisters on his blisters!

We stopped for a break at about 7km at a busy bar and most discarded their wet gear. We didn’t stay long though as a fog descended inside the saloon and nobody could get served.

We were getting close to the Holy Grail now and we assembled at a road junction, gathered everyone in and strode on into town, manfully… and womanfully. We stopped before the Cathedral square to compose ourselves and a group of pristine Italian tourists with designer clothes and umbrellas to match, stood beside us in our wet yellow Today FM t-shirts. Basically we looked like a rolling Hen and Stag party, but hey! who cared? we were almost there.

We all rushed to get our feet on the shell in the middle of the square as per Phil’s earlier photo opportunity instruction but typically when it came to my turn he put his size 12 foot on top of mine and ruined the pic. It was very emotional and many group hugs ensued. Even Phil got a cuddle from Cuddihy.

I can’t finish without paying tribute to our wonderful guides Maria and Jaime who amazed us with their caring kindness, efficiency and organisation… the measuring tape is in the post!

To you my fellow peregrinos I say well done too, it’s been a wonderful experience, I have made so many new friends and I hope you all got as much out of The Way as I did.