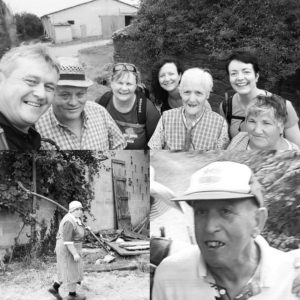 Eamonn reports from the #CawleyCamino 2016. On day 4 the team continues on the Camino Ingles from Hospital de Bruma to Sigueiro 24kms (ish). Only more day to Santiago!

An impromptu sing-song after dinner last night led by DJ Funk Daddy Owen and his magic speaker led to lots of hoarseness and the consumption of copious quantities of amber nectar to cure the tonsils. However sensible Tipp sisters Ann, Maria and Breda, AKA The Bronte Sisters were models of restraint and were at the start line chomping at the bit early doors. Maria was restraining us all as a pea soup fog enveloped our hotel and the main road we were walking so we proceeded with caution at 8.45 am.

A baby bath and an alternating hot and cold shower left me in a quandry before breakfast… so I had all three. Trucks hurtled past as we departed our spaghetti western hotel… looks like they are expecting Clint Eastwood any day now, swing doors and all into the toilets. Misty mornings seem to be the order of the day in this part of Spain, usually leading to sunny days and we strode out of town ghost-like down some nice straight flat roads.

Ann and Wendy from Kildare are fit bunnies, going to the gym, running and walking but they were still in trepidation before the trip that they might not stick the pace. However, they are flying it despite Wendy needing on-road massages for sore Achilles. Ann even found time to engage a friendly Spanish man with a big stick and a daughter in Nottingham and not Notting Hill as Ann thought.

At the bar, last night Liam from Carnew gave me a masterclass in sheep shearing but when he started to infer that I could do with a haircut I moved on!

First stop at about 11kms was in Cafe Novo and the usual rush to the bar for coffee and water ensued. I think that this part of the Camino needs development in terms of resource and infrastructure, yellow arrows are not enough. It shouldn’t be a scramble to get a coffee, what about a few mobile units servicing the route? A crepe van would clean up… maybe I’ll come back with one. 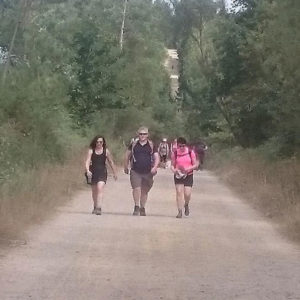 On and on over a temporary springy steel bridge where construction was happening. Well not really…3 guys in high viz jackets stared into a generator. One actually asked me for a screwdriver as I passed, well it sounded like that but it could have been Buen Camino!

A cobbled path brought us up to a nice wooded area and thankfully the incline was kinder than all of the yesterdays. It was 12.30 before the sun finally broke through and although it was mostly flat terrain we thought it was going to be hot hot hot. But it got cloudy again and the relatively cool breeze was much appreciated.

Another stop and more queuing led us to a fern festooned forest path that went on for what seemed like 10 miles never mind kilometres. Dutifully Maria was waiting when we came to a crossroads and told us it was only 2km into Sigueiro… and 3km from there to home. So we all took a nice long lunch break in town… and struggled the final 4 miles to our hotel! It seemed never-ending but finally, we made it and are now close to The Holy Grail that is Santiago de Compostela. I’m coming back with a wheel to measure this course!

Contact CaminoWays.com travel specialists for more details about the Camino de Santiago or to book your trip.