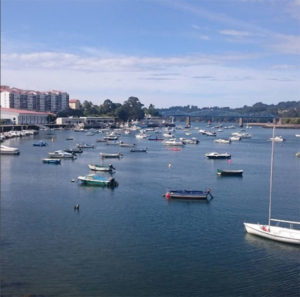 Eamonn reports from the #CawleyCamino 2016. Day 2: it’s hills and more hills as the team walks from Pontedeume to Betanzos 19.5kms.

There’s hills and there are hills, but nothing prepares you for a 30 minute incline after a rushed breakfast and a bad night’s sleep. So I really wasn’t sad to leave Pontedeume, the 2016 City of Noise…nuff said. However as we all know what goes up must come down and some nice forest trails and non tolled rickety wooden bridges that only supported one person at a time, led us across a road and past a golf course where several Sergios vied to sink the winning putt.

Phil was rather chipper today, striding out like a good thing, I think all those early nights are catching up with him! On through the forest to another steep incline which Jaime described as tricky… I could think of another word for it but it ended in T rather than started! Poor Jaime was struggling a little… too much fizz and music last night. Have you noticed that he’s getting a bit of a Galway accent from hanging around with Shane Lennon? It’ll be a number one blade next to complete the look!

Thankfully it was an overcast day but we were still sweating up like the thoroughbreds we are. Out onto almost deserted roads again until a man on a motorbike with a bunch of flowers in one hand nearly bowled me over as we cornered at the same time… Interflora my arse! Deirdre from Limerick who accompanied us on the Portuguese Camino last year with her Mum Mary, has been travelling the world since then visiting Vietnam, Cambodia, Thailand and South Africa. Poor Mary had to stay at home to mind the dogs, who obviously don’t recognise Deirdre any more!

All the distance markers on this route have been removed from those Camino shell directional stones. The fools made them of copper and they were nicked within a week such is the value of it. On the Portuguese route the distances are all made concrete…good thinking Batman! After a coffee at almost halfway Martha from Cork told me that she likes working for an American company having worked for a building contractor previously. Hope she never lets that annoying mid west drawl impinge on her lovely soft Cork brogue.

Speaking of accents what about those annoyingly yappy Spanish dogs who run at gates as we pass and frighten the living bejasus out of us… and don’t understand “Shut upa your face”…I much prefer cats.

We passed a field of pumpkins of all colours… I couldn’t resist ..Yep it’s already on Instagram.

More category 9 Tour de France type climbs followed and it was sheer will power and grit that kept us going. The downhills were as tortuous as the inclines as we got tireder and bolts of pain shot up from base of my foot through my calves into my thighs. I need a carer and Marion from Mayo was nowhere in sight… you just can’t get the help when you need it! The descent into Betanzos was as steep as our starting incline today and just about finished me off as it had started to rain by now so it was a bedraggled crew that reached the hotel in Betanzos, all ready for early baths…and maybe early nights?

Tomorrow brings us into the heart of rural Galicia and 27.5 K to the ominous sounding Hospital de Bruma. Bet you there will be carers there… and they could be needed!