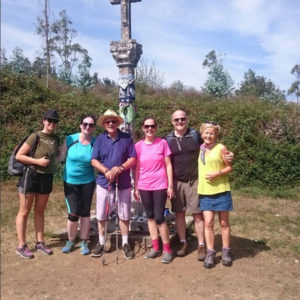 Eamonn reports from the #CawleyCamino 2016. It’s day 3 and the team continues their journey on the Camino Ingles, across Galician countryside, from Betanzos  to Hospital de Bruma 27.5kms.

A good nights sleep is a great cure for the stiffness and soreness that has set in after 2 days hard walking. Dave, or the Galway Adonis, as he likes to be known, is an actuary, but it doesn’t stop him doing mad things, like hanging around hotel reception in his boxers in the middle of the night. Thankfully he wasn’t on the move last night so we all got a decent nights kip! I don’t want to be too hard on him but for a real bean counters his grasp of the round’s system is poor too… can’t really count when it matters. Anyway he has it all apart from that… or so he told me!

Miguel Cuddihy gave us an impromptu roll call outside the hotel at 8.30 this morning in his best broken English…slagging Maria or what! As we started though misty and wet streets at first light a man with a hose gave them another coat and my shoes as well as I passed.. Jose or Hose B I wondered.On we strolled over a railway line and some motorway shrouded in early morning fog..it’s going to be hot when that burns off we thought, and we were right.

Cyril and Frances from Tramore admired their old Fiat 600 parked outside a house…nearly had the same Cork registration too…don’t take my word for it though, it’s up on Instagram.

Nurse Fionnuala from Galway has become the Howard Hughes of the group such is her reticence to be interviewed. Says she is too busy bursting blisters and generally ministering to her growing fanbase of fellow pilgrims to be bothered. Herself and colleague Tricia from Kildare are considering a “call a nurse, burst a blister” phone service and if its successful they might do it on the Wild Atlantic Way next year! Nurse Betty… eat your heart out!

On we went down a chestnut festooned lane… one the size of a small cannonball just missed me as it fell from the tree… must be my effect on nature. A clatter of cyclists went past at speed on a surface that we were finding it hard to keep our feet on. It was starting to feel like we were dancing on plates of marbles so uneven was the terrain. We took a break at about 12k in a busy cafe that strangely, had Christmas music playing… that must be why the service was so slow! 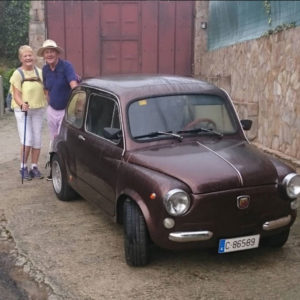 On we laboured into the beautiful Galician countryside of farmland, forests and …..hills. We caught a beauty just after 18K. 900 metres of sheer ascent…quite close to Heaven actually. And the hills were alive with the sight of Pilgrims… sorry couldn’t resist!

It was very hot now and we proceeded with caution, but my legs were singing like the crickets in the ditches. Thankfully we came back down to earth eventually and the last hour was reasonably flat. Some walked the extra kilometres to our hotel but my group new that once you crossed the finish line in Hospital de Bruma it was taxi time… thank God.

Tomorrow we shall conquer Hospital de Bruma to Siguiero andat 24kms it sounds like a doddle… here’s hoping!

Ger the Wine, as he is now affectionately known, correctly corrected my mention that Albariño wine is a Sauvignon… it is in fact a grape of its own… so there… Cheers!