7th July is a big day in Pamplona, one of the cities on the Camino Frances route. 7th July is the feast of San Fermin, the saint that gives name to one of Spain’s most famous ‘fiestas’.

Every year, thousands of locals and visitors dressed in white and red celebrate the San Fermin, or San Fermines, in the historic centre of Pamplona. The excitement of this unique festival fascinated, among others, American writer and Nobel prize laureate Ernest Hemingway who got inspiration for his 1926 novel ‘The Sun Also Rises’.

The fiesta officially kick starts on 6th July at midday, when the ‘chupinazo’ rocket is launched from the town hall to the delight of the crowds who chant ‘Viva San Fermin!’ (long live San Fermin).

Starting on San Fermin Day, 7th July, the running of the bulls across the city takes place every morning for a whole week. This jaw-dropping race, known as ‘encierro’ in Spanish, is as short as it is intense: hundreds of runners followed by the bulls run over 800 metres in just three minutes. If you are only interested in watching, don’t worry, the race course is marked and fenced, the bulls aren’t just free to roam the streets!

This perilous and adrenaline-pumping tradition has been taking place for hundreds of years, with some historians tracing the festival back to the Middle Ages, when it was a combination of religious celebratio
n and market fair with bull fighting events being introduced in the 14th century.

But while the running of the bulls is the most spectacular and fascinating aspect of the festival, San Fermin is a local celebration and as such there is much more to it than just bull running: the city hosts many activities such as concerts, parades for the children, markets and traditional sports and dancing.

The celebrations are officially closed on 14th July at midnight, when the crowds gather at the town hall with candles to sing ‘Pobre de mi’ (Poor me) and say goodbye to San Fermin. The song goes something like this: 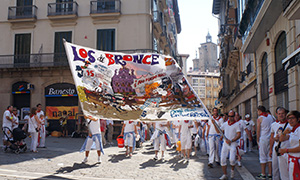 It is time to put the white and red San Fermin uniform away for another year!

If you are planning your Camino, you might want to check out our Camino Festivals Calendar.

Bear in mind hotel availability during festivals such as San Fermin can be limited and prices higher than usual, if you’d like to walk the Camino and visit Pamplona on those dates, we recommend you book well in advance.

For more information about our Camino de Santiago routes or to book your trip, contact our travel specialists