Easter, or Holy Week, is without a doubt the ‘star festival’ along the Camino de Santiago for the month of April this year. 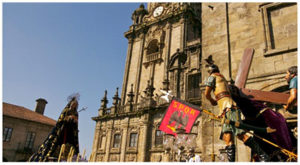 If you are walking the Camino de Santiago in April, here are some of the most special Camino festivals you will encounter on your way:

-Easter, Holy Week along the Camino

From the outstanding parades Seville, starting point of the Via de la Plata; to Ferrol, on the English Way, and of course Santiago de Compostela, Easter or Holy Week is a colourful and powerful event to witness in many locations along the Camino routes.

Fisterra also hosts very special Easter re-enactments. Padrón on the Portuguese Way hosts its Festa da Pascua from 13th to 27th April and  the village of Cacabelos on the French Way also has its own Pascua festival on 5th April.

The city of Santiago de Compostela hosts its Easter celebrations from Palm Sunday, 13th April, until the end of the month. If you are finishing your Camino de Santiago walk around these dates, you have the perfect opportunity to experience first hand one of the most spectacular cultural displays of the year. Touring the streets of the UNESCO-listed old town, Santiago’s 13 brotherhoods share the ‘passion’ in the many daily processions. Besides the classic processions, Compostela is also home to a programme of concerts of Contemplative Music, for Holy Week 2014. For a full list of Easter events in Santiago de Compostela: https://www.santiagoturismo.com/semana-santa

The fishing village of Arcade, on the Portuguese Way, celebrates its most famous produce: oysters, also this month. The Festa da Ostra, Oyster Festival in Soutomaior, Arcade, takes place this year on 5th and 6th April. Seafood fans are in for a treat.

Also along the Portuguese Way and continuing with a seafood theme, Lisbon hosts its prestigious Fish and Seafood Festival, Peixe em Lisboa, from 3rd to 13th April, showcasing the best restaurateurs and current fish-cooking trends.

Fire water or augardente is used in many Galician alcoholic concoctions such as Queimada, herb liquor, coffee liquor, etc… the town of Portomarín, on the French Way, pays homage to the ultimate Galician spirit on 5th April.

23rd April is International Book Day and Catalonia, Catalan Way, celebrates Diada de Sant Jordi, St George’s Day. Roses and books are sold across Catalonia on this day, celebrating Catalan culture, and given to loved ones.

On 25th April, Portugal celebrates its ‘Freedom Day’, Día da Liberdade, with parades, fireworks and other celebrations across the country. 25th April 1974 was the date when Portuguese military forces rebelled and peacefully put an end to the Salazar regime. It was also called the Carnation Revolution.

Also on 25th April, Sahagún, starting point of the Section 5 of the French Way, hosts its annual Romería del Pan y el Queso, a festival entirely dedicated to bread and cheese. What’s not to like?

*If you need more information about the Camino de Santiago, Camino festivals and events, or to book your Camino holiday, get in touch with our travel specialists: [email protected]