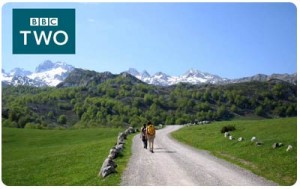 Are you walking to Santiago de Compostela along the Camino Francés in May or June? or on a pilgrimage along the Via Francigena in Italy?

BBC Two wants to hear from you!

BBC Two is looking for people traveling to Santiago de Compostela via the Camino Francés between 30th May – 2nd June for a three-part series on the history of pilgrimage.   The prime time series will explore the rich history of pilgrimage and its recent resurgence including by those who are not necessarily religious.

BBC Documentary makers are looking for unusual and interesting stories to include in the programme. Is there a special reason behind why you’re making a pilgrimage? are you doing the journey on an unusual mode of transport? or perhaps you think it can bring in a new perspective to your life? If so, they want to hear from you.

The Documentary will be filmed between 30th May – 2nd June so only pilgrims doing the Camino on these dates should get in touch.  In addition, they will need pilgrims in the following locations on these specific days:

30th May: Starting out from St Jean Pied du Port or Roncesvalles.

Pilgrims walking the Via Francigena to Rome

BBC Two is also looking for people who are traveling the Via Francigena from 28th May – 9th June.

Filming from 28th May – 9th June so only pilgrims doing the Via Francigena on these dates should get in contact.  In addition, documentary makers will need pilgrims at the following stages of their journey on these specific days:

28th & 29th May: Pilgrims starting the Via Francigena (or are in the very early stages of).

4th – 5th June: Pilgrims on or near the Grand St Bernard’s Pass.

7th – 9th June: Pilgrims in or near Rome, completing the Via Francigena.

Due to high volume of submissions, they will only be responding to some of the stories but they wish you well on your pilgrimage!