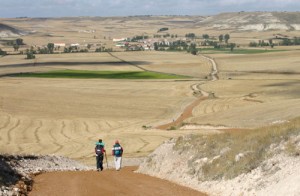 On Aug. 15, Geoff Seifert stepped onto a Paris-bound jet, settled into an aisle seat and prepared to buckle up.
He had lost so much weight – 77 pounds, already. But still the belt would not quite stretch across his lap.

In late 2011, Geoff Seifert walked 1,000 miles during an 11-week journey on the Camino de Santiago in France and Spain.
He lost 50 pounds on the walk alone and has shed even more weight while exercising at home in Manteca.
Seifert weighed 452 pounds in March 2011. Today he weighs 325 pounds, with the goal of soon dropping below 300 pounds for the first time in recent memory.
He’ll share his story at
7 p.m. Tuesday at the Stockton REI, 5757 Pacific Ave. Information: (209) 957-9479.
He steeled himself for the uncomfortable question that he knew he must ask the passing flight attendant:
“Could I have a seat belt extension, please?”
It’s the kind of question that draws quizzical looks from other passengers, the kind of question that can cause a flash of embarrassment.
But on this day, Seifert didn’t care. His mind was on the coming adventure.

Time for a change

Seifert, 35, spent much of his youth in Manteca. He played nose tackle on the Manteca High School football team.
Even then, he was a big guy.
He attended culinary school and found success as a cook. For a time he moved to Charlotte, N.C., where his father lived, and worked at Charlotte Hornets basketball games preparing meals for luxury box ticket holders. He even studied for six months in Italy before returning home and working at the Woodbridge Golf and Country Club.
He loved cooking, but over the years it rewarded him more than he would have liked. Constant exposure to food – and the long hours spent preparing it when he could have been exercising or spending time with family and friends – caused his body to grow ever larger.
There had to be a come-to-Jesus moment.
For Seifert, it happened on a warm day in March in Death Valley, when he stumbled along behind some friends on a short hike up a rocky canyon.
“It wasn’t even steep,” he said. “But I wanted to keel over and die. I weighed 452 pounds.”
Everyone else was having a great time. That’s when he thought: “I’m gonna do something. I’m gonna do something with my life.”
Looking back, it might have been the right time for change. Seifert was unemployed, a victim of the starving economy. With little means but lots of motivation, he put nearly every cent he had left into a $1,300 plane ticket to Paris.

The Camino de Santiago – or the Way of St. James – stretches 1,000 miles from central France to the northwest corner of Spain. For more than 1,000 years, Christians from around the world have walked that long road as a pilgrimage to the cathedral where, according to tradition, James the Apostle was buried after his martyrdom in Jerusalem.
Many thousands of pilgrims still take the walk each year – some merely looking for adventure, some searching for an experience that will cleanse them of the pain of a broken relationship, a failed career or the death of a loved one.
Seifert might have been the largest man on the trail as he shouldered his custom-made backpack for the first time and set out from Le Puy-en-Velay.
Five minutes into the walk, he was sweating. But somehow, he pocketed 10 miles that first day.
He already had lost weight since the disaster in Death Valley, adhering to a Weight Watchers diet and walking as many as 6 miles each day on the Manteca Tidewater Bikeway. But he was still a heavy man, and it showed on the camino.
“I was such a slow walker,” he said. “But a lot of people were encouraging me.”
That was the best part – the people he met and conversed with on the way. There was the woman from Paris who was recovering from breast cancer. The 72-year-old man from Canada who had Parkinson’s disease. The countless swift adventurers who passed him on the dusty road.
Privately, some wondered if he would make it.
But they never suggested he quit. Instead, they urged him on.
Sometimes a road, sometimes a trail, the camino wound its way through sunflower fields and pastures, up and over rolling hills, along rivers and over mountains.
While walking, Seifert and his fellow travelers plucked figs from overhanging trees and gathered chestnuts to roast that night at the next hostel down the road, where a hot meal would be served and a bed provided.
Those were the good times.
In the Spanish city of Leon – only about 200 miles from his goal – Seifert came down with food poisoning and had to stay behind and recover while his new friends moved ahead. He was alone.
“I was ready to quit,” he said.
But one day, out of nowhere, he stumbled on an American-style 1950s diner with burgers, fries and milkshakes. The waitresses wore pink Converse shoes. It was the little piece of home that Seifert needed. He pressed on.
West of Leon, pilgrims pass an iron cross where they often leave behind tokens of whatever burden they might bear.
Seifert had carried a small rock from Death Valley this whole time; friends in his local Weight Watchers group had plastered it with yellow 5-pound achievement stickers, their way of joining him on the journey. He left the rock at the cross.

On Nov. 10, after almost 80 days on the camino, he arrived at the Santiago de Compostela – the end of the road. Seifert came to an archway leading into the church courtyard, but at first, he did not want to gaze up at the soaring spires of the cathedral.
“I knew the walk was over when I did that,” he said.
But like other pilgrims, he eventually entered the church and embraced a statue of St. James, saying a prayer for those who were physically unable to make it so far.
The adventure was over. Now it was time to tell everyone about it – to inspire them to find their own adventures.
He already has.
A half-dozen Weight Watchers groups in Manteca have launched their own 1,000-mile challenge in recognition of Seifert’s accomplishment. Collectively, the groups are racing to see who can walk, swim, cycle or run that distance in the shortest amount of time.
Seifert has already shared his story with those groups. The public can hear him speak Tuesday night at the Stockton REI.
What’s special about that story, one observer said, is that Seifert didn’t delay his journey until he was in optimal shape. There was no, “Someday … “
“You don’t have to wait until you get to your goal,” said his friend, Manteca Weight Watchers group leader Heather Baugus. “You can start doing things; you can start living your life now. That was one of the things he showed, and it was such a powerful thing.”
Seifert described the changes in his life this way: “I’ve never been happier. I can legitimately say I’ve never been happier.”

The best of all sounds

In November, back in Europe, it was finally time to go home. Boarding an airplane in Paris, Seifert found his seat near the rear of the plane.
The friendly Italian flight attendant approached.
“Do you need a seat belt extension?” she asked.
“I don’t know,” he said with a smile. “Let me find out.”
Seifert took the seat belt latch, pulled it across his lap, and heard an exhilarating “click.”