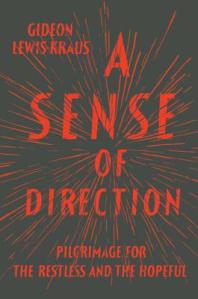 In his book “A Sense of Direction,” Gideon Lewis-Kraus offers an alternative definition of pilgrimage for atheistic path-seekers like himself: “a way to have a trip with some higher purpose.”Sick of the same old, same old in his laid-back writer’s life in San Francisco, he took off to Berlin, where he bummed around for a couple years under the pretext that he had a Fulbright assignment. It got too easy to kick around, all day, every day in the expat bohemia there, so Lewis-Kraus took a train to Estonia where his friend, writer Tom Bissell, convinced him, after many beers, to abandon everything and walk 800 kms of the Camino de Santiago with him. Even in his hangover haze the next morning, Lewis-Kraus found himself all gung-ho for the ordeal, thinking it would not only give him something to do, but it also would engender within him a sense of purpose that had been sorely lacking throughout his post-grad life. If nothing else, the repetitive footfalls might induce a meditative state that would help him sort out his ongoing bind, which Bissell aptly describes as one where “you either feel like you’re too tied up…or you feel like you’re not tied up enough and have no idea what to do.”

The punishing trek along the Camino seemed to do the trick. Lewis-Kraus’ self-exile into no man’s land led him to a communion with nature and other pilgrims (predominantly secular ones), as well as to new insights into his own life, often brought on by the plodding monotony of his journey, which he faithfully records. It also gave him the idea to write a book, where he would go on still more pilgrimages and compare and contrast his postmodern experiences with those of the religious pilgrims of yore. “Sense of Direction” takes Lewis-Kraus from his Spanish hike, to a couch-surfing stint in Shanghai, to a far more grueling 1,200 kms expedition through the 88 temples of Shikoku in Japan, which only one percent of all Shikoku pilgrims dare to make on foot. From there, he goes to Uman, Israel for Rosh Hashanah with his brother Micah and his father, a rabbi with whom he hopes to mend fences.
If you’re trapped in a cubicle, dreaming of freedom, Lewis-Kraus’ tell-all will prove vital in helping you weigh the pros and cons of setting out on foot to find your purpose.

No one can accuse Lewis-Kraus of being a minimalist. Given the amount of detail he goes into, it’s a wonder he was even able to lift his backpack, what with the stacks of notebooks he must have filled up on each successive pilgrimage. He is a gifted documentarian with an anthropologist’s eye for all the cultures, landscapes and monuments through which he travels–although he is guilty of carpet-bombing his text with five-dollar, words-you-should-know (e.g., “aelatory,” “oleaginous,” and, to his friend, the tin-eared “your vituperative anti-religiosity is just as simplified and hackneyed as those Richard Dawkins tirades”–awww, snap!) that come off as more show-offy than clever.

Yet, while Lewis-Kraus makes it clear that he doesn’t want to write your average travelogue, it’s as a memoirist that he falters. From the first chapters, he kvetches endlessly about his father. Now, in Lewis-Kraus’ defense, his father did cat around on his mother for the better part of two decades before finally coming out of the closet; then, instead of making amends to the family for having lived a lie, his father repeatedly pats himself on the back for finally being true to himself. Yet this becomes a monomania for Lewis-Kraus, which readers of “Sense of Direction” must slog through, even though those of us who are LGBT renegades from Limbaugh-loving, religious-right households would swap pasts in a New York minute with a straight kid from a liberal, Jewish intellectual family with a gay dad at the head of the table.

But Lewis-Kraus is a smart and dedicated writer, unflinching, especially in his accounts of the gruesome conditions of his and his friends’ wayfaring feet: “no fewer than eight blisters per foot, springlike in their suppurating blooms.” If you’re trapped in a cubicle, dreaming of freedom, Lewis-Kraus’ tell-all will prove vital in helping you weigh the pros and cons of setting out on foot to find your purpose.